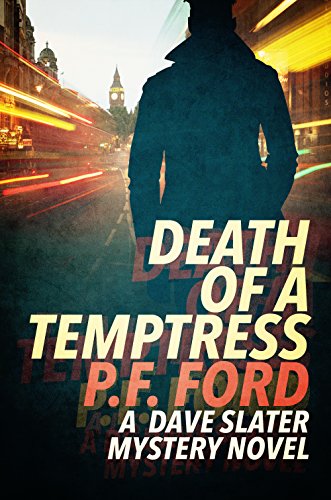 Death Of A Temptress

The Dave Slater Mysteries are a classic British blend of character, suspense and humour.
In Death of A Temptress, a missing woman, police rivalry, a glamorous double life, corruption and top-level secrets all combine to create the perfect Sunday evening drama.

DS Dave Slater is suspended from duty. The injustice of taking the rap for a fast-track London detective's botched investigation hits him hard. To add insult to injury, his boss hands him a closed case for a discreet re-investigation. Is this a chance to redeem himself or a way of ensuring he fails?

Ruth Thornhill went missing six months ago. According to the evidence, she ran off with another man, so the Met closed the case. However, Ruth's sister Beverley refuses to give up. And Beverley has friends in high places.

Slater's enquiries soon find inconsistencies in the original investigation, and after a near-fatal encounter with a London bus, he realises the stakes are far higher than he imagined. Someone wants him to disappear.

An unlikely ally, in the form of fellow scapegoat DS Norman Norman, helps him uncover disturbing connections between the missing woman, a Chinese businessman, a glossy magazine, an online escort agency, a top London banker and senior officers from London's Serious Crime Unit.

The two uncover a mire of corruption, blackmail, deception and possibly the most cunning murder ever seen. The evidence stacks up against one particular suspect and Slater and Norman close in.

But as with most things in Slater's life, nothing is ever simple.