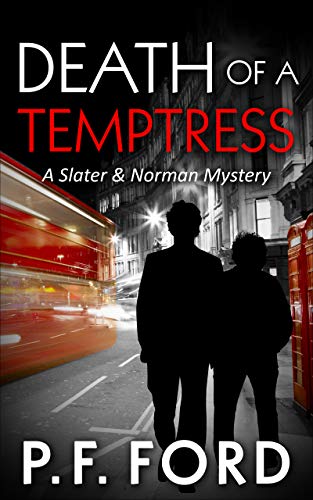 Death Of A Temptress

The Slater & Norman Mystery series is a blend of character, suspense and humour, that never takes itself too seriously. If you like good old-fashioned storytelling, meet Dave Slater and sidekick Norman Norman, two wonderfully, humanly, flawed characters who will soon feel like old friends.

After being made the fall guy for the Serious Crime Unit’s incompetence DS Dave Slater is suspended from duty. Bored out of his mind sitting at home, all he wants is a chance to put the record straight and get back to work. Then, out of the blue, his boss calls. He has been asked to find someone to re-investigate a case “under the radar”. But is this a chance for Slater to prove himself, or a trap designed to finish his career for good?

Ruth Thornhill went missing six months ago, but Slater soon finds enough discrepancies between the case file and the facts to realise there’s been a cover-up. Curiosity aroused, he begins to ask questions and rattle some cages. When someone tries to push him under a London bus, Slater knows he’s onto something big, but now the stakes have been raised his boss insists he needs help.

Slater is horrified to find his partner is new to the station and rumoured to be as good as useless, but his boss insists, he has no choice. It turns out new partner DS Norman Norman isn’t quite as hopeless as rumour suggests and, just like Slater, has also been used as a scapegoat by the Serious Crime Unit. And again, just like Slater, he would relish the chance to prove a point.

The stakes get higher still when they uncover some disturbing connections to the missing woman. These include a Chinese businessman, an online escort agency, a top London banker and, most dangerous of all, senior officers from the Serious Crime Unit.

Can the new partners survive long enough to uncover the full story (and stay alive doing it!) or is this going to be the first and the last case they work together?