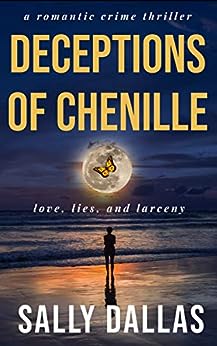 Chenille evolves from a petty criminal to a full-blown felon, involved with a drug cartel laundering money. She has propelled herself into an inescapable web of her own creation, putting her life, and that of her young son, in danger. All she wants is to be loved.

I was hooked after page one, trying to figure out what was coming next: mafia, embezzlement, money-laundering, international travels. The story adds layer upon layer of intrigue. Gina Mitchell - Book Blogger.

When attorney, Chenille Conrad, mysteriously disappears her husband, Daniel, suspects the worst. She wouldn't leave him - they're deeply in love and on the fast track to successful careers, a house in the suburbs, and a family to fill it. The discovery of her bloody sweatshirt escalates the investigation from a missing person case to a homicide, with Daniel as the primary suspect. To prove his innocence, he puts the pieces of the puzzle together, yet can't overcome his need to protect his wife. Shocking clues exposing her motivations, and true persona, are revealed. Who is this stranger he married?

An intriguing romantic suspense novel that follows Chenille's evolution from a spoiled Southern California teenager, committing petty thievery, to a full blown felon, crossing paths with an international drug cartel. Realizing she's in too deep, she yearns to come home and reignite her love with Daniel, but is it too late? Chenille has propelled herself into an inescapable web of her own creation, putting her life, and that of her young son, in danger.

Ten percent of the net proceeds from book sales are donated to non-profits that empower women worldwide.