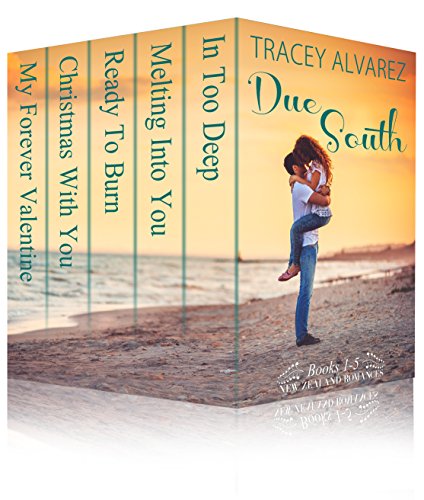 The Due South boxed set contains the first 5 books of Tracey Alvarez’s series set in New Zealand.
The first 5 Due South Books included in this bundle are:
-In Too Deep
-Melting Into You
-Ready To Burn
-Christmas With You
-My Forever Valentine

The Due South bundle contains the first five books of Tracey Alvarez's series set against the stunning backdrop of Aotearoa, New Zealand. If you like heartwarming, sexy and sweet small-town romances with a touch of comedy, you'll love sharing the journey with these authentic men and women struggling to find their special someone.

The first 5 Due South Books included in this bundle are:

In Too Deep
Two hearts. A second chance. Everything on the line…
To save her brother from financial ruin, police diver Piper Harland does the one thing she swore she'd never do—return to the tiny island hometown on Stewart Island where Ryan "West" Westlake crushed her heart. West lost Piper once, but now she's back for an unexpected six week visit. Maybe he wants her a little bit, but can he fall in love with such a flight risk? Saying goodbye the second time might just destroy them both.

Melting Into You
They'll either melt or raze their lives to the ground…
Ben Harland is, by his own admission, a bit of a grouch. He doesn't do soppy chick-flicks and he's hen-picked enough as it is with his mother and two younger sisters on his case. He sure doesn't need any more drama in his world. But life has a way of rearing up and biting him in the butt when he least expects it. Cue insta-daddyhood to an eight-year-old girl and an out-of-control attraction to Stewart Island's hot school teacher, Kezia Murphy.

Ready To Burn
Watch the sparks fly as they burn it up in the kitchen…
Shaye Harland desperately wants the role of Due South's head chef, but the far too sexy Del Westlake muscles in and steals it. A reality TV show plans to feature Del at his estranged father's restaurant—jump-starting his ruined reputation and career in the States—but will the sparks flying in the kitchen burn his chances of ever becoming Shaye's Mr. Perfect?

Christmas With You
The Kiwi barbecue isn't the only thing sizzling this summer...
Carly Gatlin's doesn't want to spend another Christmas alone since her father died the year before. She's come to Stewart Island in New Zealand to spend the holiday with her stepfamily, though she feels more of a Christmas Grinch than filled with good cheer. Kip Sullivan's big, boisterous family have also arrived en-masse—someone just shoot him before his match-making relatives get out of control. Kip agrees to make Carly's first Kiwi Christmas special, but will he gain more than mistletoe kisses from the woman who threatens to claim his heart?

My Forever Valentine
Love small town romance and Happily Ever Afters?
Dive into the Due South world to find out what your favourite characters are doing to celebrate Valentine's Day with these four short and sweet romance stories.