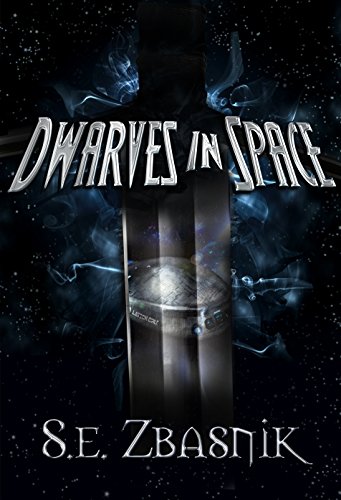 A missing assassin, a broken ship, an enraged knight, a kidnapped government official, and her biggest secret about to unravel; Variel’s day keeps getting better and better. Dwarves in Space is Tolkien merged with Hitchhiker’s and Firefly in a horrific transporter accident.

Thousands of years after the jewelry's destroyed, the sword reforged, the dragon ridden, and the indecipherable prophecy translated into a recipe for sugared biscuits, the dwarves turned to that final frontier: space. And along came the elves, orcs, gnomes, trolls, ogres, and those vermin-like upstarts, humans.

Dwarves in Space is Tolkien merged with Hitchhiker's Guide to the Galaxy in a horrific transporter accident.

The Elation-Cru is not the flashiest ship, nor the newest, or even has all of its bolts attached; but she can fly. Well, sort of wade through space, and that's when all the parts are working. She supports a sugar addicted dwarven pilot, an elven engineer, an orcish doctor, a silent djinn, and the lone human trying to hold the entire thing together with duct tape. Variel, the captain, has been hiding from a secret for the past five years and time's finally run out.

When she goes against her common sense and fights to save her onboard assassin/renter from a job gone sour, she finds herself before an ex-colleague that knew her in her previous life as the Knight of the realm. The entire ship is sent on a mad dash across the universe — from a decaying space station, home to the wackiest species the galaxy has to offer, down to the Orc homeworld, which wouldn't be so bad if Variel hadn't spent most of her previous life fighting in the war against them. Chances of survival are nil and slipping fast.