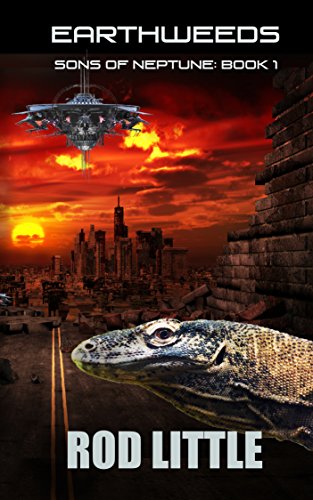 When humanity vanishes, 9 survivors must unravel the disappearance and defend Earth from invasion, while hordes of creatures swarm the planet, fighting each other for the remaining food supply. The humans must take sides, and 2 boys have special gifts that may change our world's fate.

It's not the end of the world, it's the start of something new.
Two students return from a mountain camping trip to find an empty city: Pittsburgh is desolate. Only a few living souls remain in the countryside.
And then the lizards appear. The size of men, they flood the city and attack the few remaining people. When these mutated creatures are confronted by giant spiders, the two species fight each other for the remaining food supply ...with the humans caught in the middle.

A teenage boy with electric powers, a college student who can communicate with animals, a scientist with a dark secret, and a band of psychopaths with their own agenda... all come together.

Defending each other from the evils of men and creatures alike, the last humans form separate camps and race to unravel the mystery of the deserted cities, the swarming creatures, and the threat to humankind. While fighting off the giant monsters that sprang from nowhere, they search for clues that lead to strange devices and the possibility of involvement from other planets.

But the mystery of the human disappearance remains.

Sam, born with the ability to generate electric charges, teams up with a boy who can understand the language of birds and spiders, and together they set out to find the answers. Another camp led by a mad scientist is racing to find the same answers, but for a very different reason.

A post-apocalyptic science fiction adventure...blending together elements of monsters, survivalists, special abilities and the mysteries of ancient alien artifacts.