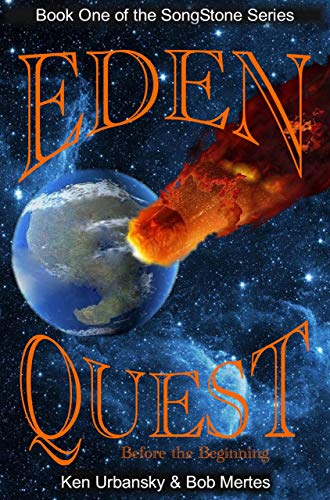 Eden Quest, Before The Beginning

Lucifer's rebellion has cast the universe into chaos. But despite the darkness, there will always be those whose light cannot be dimmed. In EDEN QUEST, they come from the past, present, and future to create an unlikely alliance, each with their part to play in restoring peace to the universe.

Is it Christian Fiction or tomorrow's headlines?
Ancient stories from the Bible, or warnings of
what is to come?…………………..You decide!!
Lucifer and his fallen angels have cast the entire universe into chaos.
Millions of innocent lives have been subjected to futility, corruption, and slavery.
In Romans 8:18-22, the apostle Paul paints a picture of the universe (the whole creation) as being subjected to futility, slavery, and corruption. (The result of Lucifers rebellion) Yet, in their suffering, there is hope. As in the pains of childbirth, they long for the arrival of the redeemer. Not the one who visited Earth, for His work 'is finished,' but for His disciples. "For the anxious longing of the creation waits eagerly for the revealing of the sons and daughters of God." Rom 8: 19.

A journey back in time.
EDEN QUEST, returns you to the days before Lucifer's rebellion, where you will meet Rapheldrn (Ra FELL drin) and Milderett. This humble wine and olive oil maker and his wife live in a time before lust, greed, and hatred turned the hearts of the people away from their Creator. Their home planet of Tyros has been targeted by Lucifer and his fallen angels to suffer the first attempts at introducing evil into a culture. The success of their evil plan is beyond anything Lucifer could have hoped for. But no matter how great the darkness, there will always be the few whose light can never be extinguished.

˃˃˃ An unlikely hero.
You will also meet Bobby (Reed) Westerly. Born in a sleazy motel in Augusta, Georgia, in 1948, Bobby grows up hating God but loving books. An angelic visitation and the "great lion Aslan" eventually lead him to a life of discipleship and study. His knowledge of forbidden texts and his willingness to view the Bible in new and unorthodox ways may give him the tools he needs to save both his world and God's.
Bobby is convinced that the Nephilim, the 20th-century descendants of the Watchers, the fallen angels of Noah's day, are still trying to fulfill their ultimate goal: to access a portal to the Garden of Eden and partake of the Tree of Life gaining immortality. The same goal their ancestor Nimrod failed to accomplish.
Now, in possession of an ancient and divine instrument capable of opening portals, and the technology of the twentieth century at their disposal, they may yet succeed where Nimrod failed. But before he can stop them, Bobby must answer one inescapable question. How did the Nephilim, the offspring of the Watchers, survive a flood that the New Testament writer, Peter, claims only eight people survived? To answer that question, Bobby must tell the story of one more character in the saga: Nataya, daughter of Turel, the fallen angel.