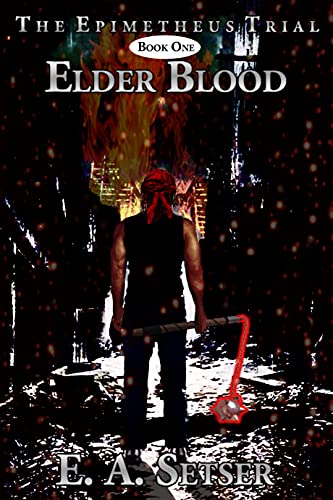 An extinct and long-forgotten hominid line reemerges in four children across Ouristihra. Otherwise human, these Hybrids bear physical mutations and elemental powers. Wielding bizarre technology, The Avatars of Fate manipulate a soldier to seize the nation of ArcNos. Preaching the doctrine of The Epimetheus Trial, their focus with the Northland powerhouse is twofold. Topple the rest of Ouristihra. And eradicate the Hybrids.

Everyone Has Their Secrets
In Berinin, a new Chieftain Heir is born, but only his grandfather and a child from ArcNos know the truth of his birth. In Ferya, a denial of paternity fractures a family. In Ivaria, the plight of an orphan motivates his adoptive father to seek a child of his own blood.

Soon after, an ArcNosian soldier walks into the clutches and care of a shadow group with technology paling all of Ouristihra. Thus begins his rise to power, flanked by The Avatars of Fate as they preach the doctrine of The Epimetheus Trial.

With their hands firmly in the Northland powerhouse, The Avatars' focus is twofold. Topple the rest of the continent. And eradicate the Hybrids.

Derelicts, rebels, and refugees come together to overthrow the new power structure and drive out The Avatars. Nobody knows where they came from or what they're ultimately after. But one thing is certain.