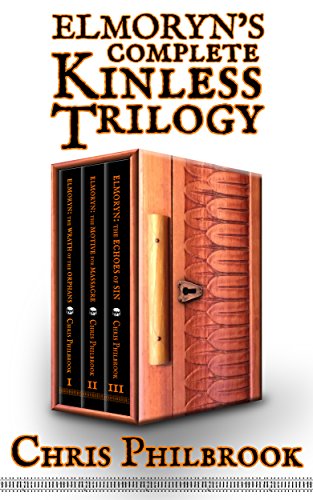 Elmoryn's Complete Kinless Trilogy collects three of Chris Philbrook's novels into a single boxed set with a new foreword by the author.
-The Wrath of the Orphans
-The Motive for Massacre
-The Echoes of Sin

Elmoryn's Complete Kinless Trilogy collects three of Chris Philbrook's novels into a single boxed set with a new foreword by the author.

The Wrath of the Orphans
What do you do when everything you've ever known is ripped away from you, leaving nothing but ashes, and charred memories behind?

You get angry. So very angry.

Malwynn and his twin sister Umaryn live in a small town in northern Varrland. In idyllic New Picknell nearly nothing happens, and when their day to day routine is interrupted by a skirmish between an invading patrol of the dead from The Amaranth Empire and a defending force from Varrland, their world begins to come undone.

With international war looming on the horizon New Picknell becomes the center of quite unwanted attention, and the twins have their world shattered. With nothing left to lose, they set out on a mission of vengeance that will take them to places they'd never dreamed of visiting, discovering mystical powers in The Way that will change their lives forever, and revealing dark knowledge best left undiscovered.

The Motive for Massacre
Malwynn and his twin sister Umaryn experienced true horror when their hometown of New Picknell was razed to the ground in the first act of war by a Necromancer from The Amaranth Empire. They took their thirst for vengeance north across the border, and after killing both the innocent and the guilty alike, they discovered a horrible truth. The Empire did not order the strike.

The Necromancer was paid.
Book two in The Kinless Trilogy follows the Everwalk twins in the capital city of Varrland as they attempt to follow the clues they wrung from the corpse of Omniri Decadra. The looming war between Varrland and the Empire races them as they attempt to find out who wanted their family and the entire town destroyed, and why. The Church, the Guild, and the government all seem to have a stake in what the twins do, and it becomes very hard to tell who, if anyone is on their side.

Sometimes the truth is far, far worse than a lie, and your friends are more a threat than your enemies. But will that stop the twins from falling in love when they are most vulnerable?

Join Malwynn and Umaryn as they attempt to right the wrongs they've suffered once again, no matter the cost.

The Echoes of Sin
With a mysterious key in hand, and their only friends by their side, the twins Malwynn and Umaryn race against the Amaranth Empire's Invasion.

Chased from the capital city of Varrland, branded as criminals for the murder of their traitorous aunt, they begin the trek to the forlorn wilderness of Duulan. They seek a village where their parents had nearly perished decades ago, where an abandoned mine, protected by an army of the dead, conceals the darkest secrets of Elmoryn.

Can the twins unveil the secret that hundreds died for before the Purple Queen's army overruns Ockham's Fringe? Will it even matter once they discover what lies beneath the earth of Duulan?

Conspiracies older than memory are dug up and revealed, the echoes of sins long hidden in the darkest recesses of time.

The worst may be yet to come.