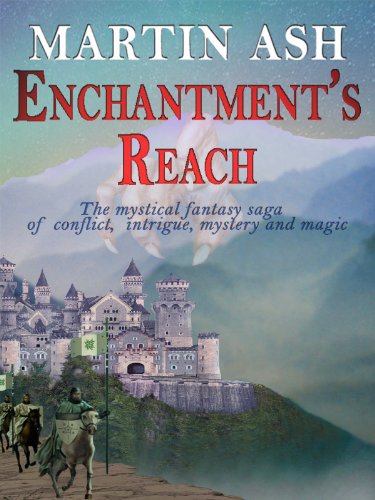 An extraordinary work of tense, visionary fantasy, Enchantment's Reach is a breathtaking, intricately-woven saga of conflict, mystery, intrigue, magic and betrayal in a world where the fabulous and unexpected are the norm.

An extraordinary work of tense, visionary fantasy, Enchantment's Reach is a breathtaking, intricately-woven saga of conflict, mystery, intrigue, magic and betrayal in a world where the fabulous and unexpected are the norm.

The small kingdom of Enchantment's Reach lies close to the mysterious land of Enchantment from where strange energies seep, borne on unnatural breezes. Untamed magic resides in the air, in the land itself, and sometimes deep within the minds of its inhabitants.

In a time of immense tension, Enchantment's Reach is being torn apart from both inside and out. From the southwest come the Karai, an enigmatic warrior race not wholly human, whose army now musters close upon the border. The Karai are in league, it appears, with powerful entities who dwell within Enchantment itself, commanding advanced technologies and commonly held to have the powers of deities. Yet neither the Karai nor these godlike beings of Enchantment have been known before to interfere directly in the affairs of lesser creatures.

What do they seek from the Reach?

Further perils beset the small kingdom. Internal as well as external conflicts threaten its King, Leth, his young queen, Issul, and the people of the Reach. Ancient religious factions are resurgent, fanatical cults revive old feuds and rise to threaten the realm. And somewhere deep within Enchantment's Reach itself a mysterious creature appears, an incredibly ancient inhabitant of some other dimension, seeming secretly to wield unusual influence over King Leth.

Ahead lie treacherous intrigues both human and otherworldly, and a desperate quest into lands of warring gods, into dimensions previously uncontacted, and into the depths of unconscious creation in search of keys to mysteries dark, enigmatic and profound.

A true epic brimming with secrets and revelations, Enchantment's Reach is an inquiry deep into mysteries of existence, the nature of experience and knowledge, of belief, desire and treachery, and of jealous 'gods' and scheming humans, all with a narrative power that will hold the reader enthralled from beginning to end.