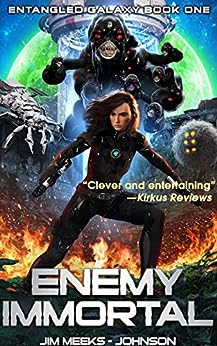 An alien colony vanishes without a trace, and Lt. Jade Mahelona is the human redshirt on the team of aliens sent to investigate.
A sadistic ten-ton cyborg attacks to reach the colony first. Soon, Earth's only hope is that Jade can turn an oddball group of aliens into an effective team before an evil power spreads across the galaxy.

An alien colony vanishes without a trace.

It's the year 2206, and a ship from a federation of alien planets called the Entanglement is orbiting Earth with a gateway to the stars. A fleet of sadistic, Immortal cyborgs will arrive to invade Earth in six months, and humanity must join the Entanglement's rigid caste system or face slavery to the Immortals.

Lieutenant Jade Mahelona of Solar Defense Force doesn't want to get involved in interstellar politics. Too bad. Jade must go on a quest to find the lost alien colony on a remote planet, and if she fails, the Entanglement will abandon humanity to the ravages of the Immortals.

Jade struggles to fulfill her mission as the Immortals attack her, a mysterious hidden power stalks her, and her alien partners spurn her. Then, in the ruins of an ancient civilization, she discovers advanced technology beyond anything the Entanglement or Immortals dreamed of. There's a chance Jade can forge a better future for humanity—if she can live so long.