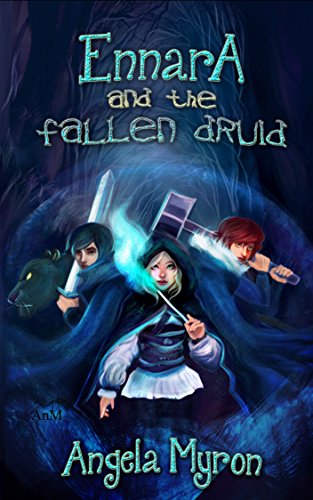 Ennara And The Fallen Druid

When a mysterious curse threatens to transform everyone into shadowy demons, a magical eleven year-old girl must travel to a sunken city ruin—fighting pirates, monsters, and an undead sorcerer along the way—to find a weapon that can save her world.

Eleven year-old Ennara Gaern has a serious grudge against the dragon on her right hand.

Born with a mask that foretold magical powers, she was immediately inked with the fiendish, fire-breathing tattoo that forces her to study boring texts, cover her hand continuously, and worst of all, keeps her from visiting the beautiful capital city, Dordonne. But her quiet life changes when one night she is attacked by a shadowy demon.

Tork, an old friend and wizard, is enlisted to help. But when he arrives, he informs Ennara's parents that she is her world's only hope of finding the legendary Sword of Gisilfrid, which is needed to destroy the curse that is creating the demons. Ennara doesn't want to leave on the dangerous quest, but when she learns the curse threatens her world, she reluctantly agrees.

Ennara and the wizard begin a perilous journey to the Sunken City, pitting them against dangerous oceans and pirates intent on claiming Ennara's magic as their own. With only her friends at her side, including the intelligent, aquatic cat Smoos, Ennara must defeat monsters guarding the sword and servants of the Fallen Druid. When her world is covered in darkness, will she know how to dispel the curse?