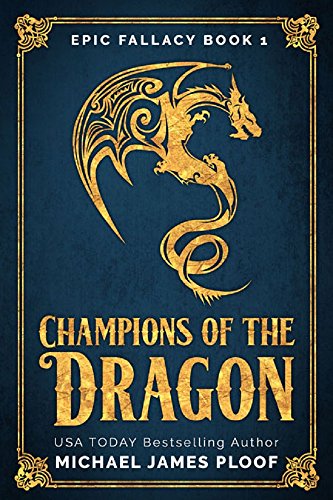 Epic Fallacy: Champions Of The Dragon

Epic Fallacy is a comedic tale of friendship and foolery, heroism and hardships, and a dread dragon of legend. Five unlikely companions find themselves thrown into an adventure with the fate of the world resting on their shoulders when they are each named champions of the dragon.

Murland Kadabra has always dreamed of becoming a great wizard. However, at age 19, the young apprentice has yet to successfully cast a single spell. He has been reduced to grounds keeper of Abra Tower, and has become the laughing stock of the wizarding school. But when the Most High Wizard Kazimir chooses him to be one of the five Champions of the Dragon, Murland's life changes forever.

He soon finds himself traveling through the wilds with four unlikely companions, including an alcoholic knight, a gay elf prince, a dwarf with humanism, and an obese ogre. Prophecy dictates that these champions must march west to the shadowy peak of Bad Mountain, where they are destined to do battle with the dreaded dragon of legend, Drak'Noir.

But what few people know, is that the prophecy is not altogether true. For it is not five champions who Kazimir chooses, but five fools. They are not meant to defeat the dragon, but to feed her.

To change their fate, the Champions of the Dragon must not only overcome their enemies, but also themselves.