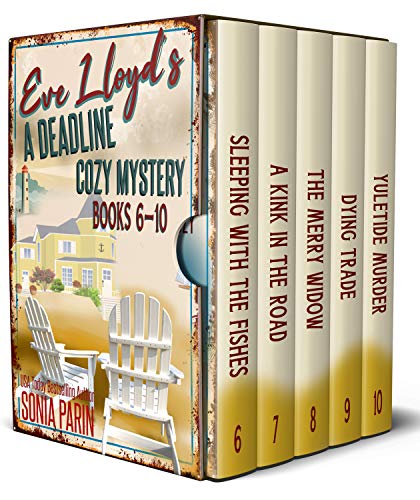 Fun-filled small-town cozy mysteries. 6: Eve’s on a cruise with 100 Carmen Miranda impersonators - make that 99. 7: An unexpected guest arrives with an entourage of ex-wives and a killer. 8: A shopping spree, a murder and no suspects. 9: Eve’s catering can be deadly. 10: Christmas with Eve Lloyd. What can possibly go wrong?

Eve is on a cruise with her aunt, Mira, and suffering from separation anxiety. However, she’s made up her mind to enjoy the trip and, despite her reservations, she is willing to use anything and everything in her arsenal of personal inducements to ensure she makes the best of this cruise. But on her first day, she discovers someone has gone overboard. At least, that’s what the captain wants her to believe. Eve has had too many close encounters with killers and suspects foul play. Now she must tread with care because the killer’s choice of weapon leaves no room for negotiation.

A Kink in the Road
Eve’s new inn is about to open, with or without a name. As a new local business owner, Eve thinks it would be a splendid idea to attend a local town meeting. Little does she know she’s been excluded from them for a good reason. She’s been labeled a troublemaker. Now there is a new resident in Rock-Maine Island and she’s been warned to stay away from him.

One look at William Hunter the Third is enough to convince Eve she wants nothing to do with the man. Despite everyone’s efforts to keep Eve away from him, the inevitable happens and he lands on her doorstep. To make matters worse, the billionaire brings along an entourage which includes his ex-wives, his friends and… a killer.

The Merry Widow
What can possibly go wrong when Eve Lloyd leaves her friend Jill in charge of the Seabreeze Inn and takes a day off to drive to the mainland with her aunt Mira? Well, despite being under strict orders to not buy any more furniture for her inn, she falls in love with a Quaker chair… or two, and some old cameras which set her up as bait for a killer on the loose. Add to that a happy-go-lucky hostess intent on drinking her way through a cellar full of champagne, a blackmailing ring and Jill’s reluctance to leave her side. For once, Eve Lloyd has her back to the wall and no suspects to point her finger at.

Eve has set her heart on opening a new business in the heart of Rock-Maine Island. Her young friend and employee, Jill Saunders, thinks this is a bad move because she is bound to set something into motion. And, she does… First, the most unexpected visitors land on her doorstep and send both Eve and her aunt, Mira, into a state of frenzied panic. Then, before the sun sets, she makes a horrible discovery. It seems her store has been marred by a crime. On the bright side, it pre-dates her arrival on the island. For once, no one can point the finger of suspicion at her. But she’s not exactly out of the woods. Someone is trying to kill her. Worse, the mob is after Eve Lloyd and they won’t stop until they get what they want from her.

Eve Lloyd has closed the Seabreeze Inn for the holidays. She is all set to entertain her friends and hold her first Christmas party at the now empty inn. She has even written a note to herself: Make this the best Christmas ever!
Embracing the spirit of Christmas, she is singing Christmas carols and decking the halls… But then, her aunt Mira receives bad news. Determined to cheer her up, Eve goes in search of the tiny marshmallows her aunt loves. This is nothing but a slight detour… Or so she thinks. Her first Christmas at her inn, in her idyllic little island town is about to be derailed when a body is found floating face down, practically on her doorstep.