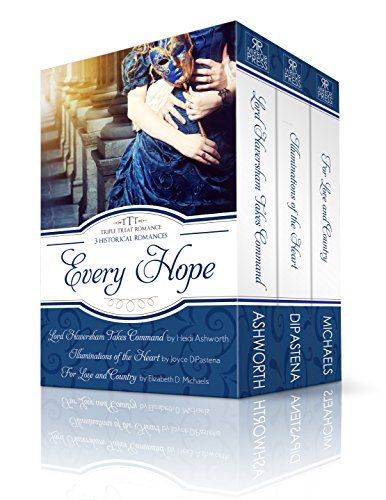 Every Hope: A Triple Treat Romance

Lord Haversham feels as if he is always running, first from his foolish parents, Lord and Lady Avery, and now as a secret service agent to the young Queen Victoria. Traitors are seeking his life, and Haversham must adapt the façade of a silly fop. Little does he know, this presents danger of a different kind: being found out by the perceptive, sapphire-blue gaze of his childhood love, Miranda Crenshaw. How is he to win her heart without giving away his secret and endangering the life of the Queen?

ILLUMINATIONS OF THE HEART, a Medieval Romance by Joyce DiPastena

Siri de Calendri was trained in the art of illumination in her brother's workshop in Venice, but when he dies, his will sends her far from home. Siri travels to France, where she enters the guardianship of her brother's friend, Triston de Brielle. Once settled, she hopes to find employment in an illuminator's shop— until Triston unexpectedly snatches her heart away with a kiss. Triston carries guilt for the death of his wife, making him hesitant to love again. Worse yet, Siri bears an uncanny resemblance to his lost love. When he gazes into Siri's face, all he sees is Clothilde. But Siri is determined not to live in another woman's shadow. She has illuminated many a priceless book with pen and paint, but can her own vibrant spirit illuminate the darkness in Triston's soul and make his heart beat for her alone?

FOR LOVE AND COUNTRY, a Regency Romance by Elizabeth D. Michaels (pen name of Anita Stansfield)

When Maggie du Woernig willfully ignores her parents' admonitions and entangles herself with Nik Koenig, she is certain he's the only man who will make her happy. Blind to Nik's real intentions, she throws herself recklessly into a situation that could not only destroy her life but compromise the safety of her country. Han Heinrich has resigned himself to working in the castle stables, mostly as an excuse to have contact each day with Maggie. His aspirations for a more fulfilling career seem fruitless, in spite of his father's position as the duke's highest advisor. But when Han learns about Maggie's precarious situation, he is willing to sacrifice everything to protect the woman he loves, and to save the country he would die for. He only hopes that someday Maggie will forgive him.