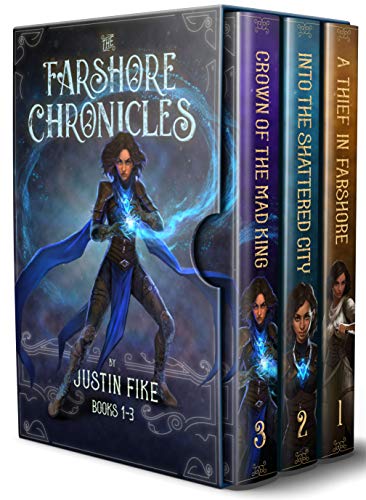 A quick-witted thief is sentenced to a faraway land of magic, myths, and monsters.
The Farshore Chronicles is fast-paced Sword and Sorcery in the tradition of RA Salvatore, David Eddings, and Mercedes Lackey. If you enjoy action, adventure, humor, and compelling characters set in a magical world, you will love this fantasy series.

A quick-witted thief is sentenced to a faraway land of magic, myths, and monsters.

Charity is a thief who survived Byzantia's deadly streets by thinking fast and running faster... Until a heist gone wrong saw her imprisoned on a ship sailing to the far side of the world.

Farshore, the Emperor's First Colony across the great sea, is humanity's lone outpost in a land inhabited by monsters, wild magic, and races from legend.
Turns out, myths are just as deadly as a knife in the dark.

A quick temper and a sharp tongue soon earn her a deadly quest with a group of outcasts who would readily kill each other if not for the threat hanging over their heads. Their only hope of survival lies in working together.

When their quest unleashes an ancient king bent on conquest, Charity must adapt and learn to trust her new companions if she hopes to stop him. If she fails, two worlds will fall with her.