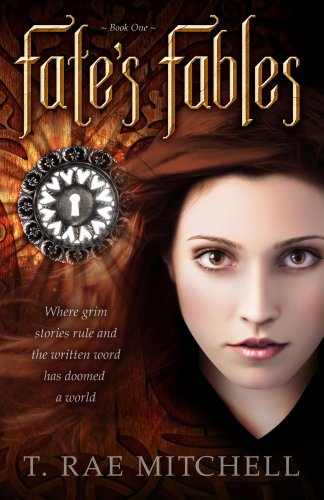 When a summoning spell draws Fate Floyd to the Book of Fables, she meets the mysteriously familiar Finn. Together, they become trapped inside the book’s savage wonderland, where Fate endures horrors beyond imagining, and discovers her only escape is to change the endings of the magical book's 8 dark fables into their mirror opposites.

Let Fate take you on a journey through 8 chillingly enchanted fables.

Seventeen-year-old Fate Floyd loves adventure--as long as it's enjoyed from the comfort of her couch. So it's probably best she has no idea the future of the universe rests squarely on her shoulders.

Far from Earth in the deepest region of space, a colossal screw-up has unleashed terrible forces within a secret vault called the Keep. In a last ditch effort to prevent eternal chaos throughout the cosmos, the Keep's Guardian must send her successor on a desperate mission. Summoned by this complete stranger's spell, Fate's cast into a savage wonderland bound by the ancient Book of Fables to retrieve a magical object powerful enough to set everything right. And if getting chucked through a secret portal isn't traumatic enough, Fate discovers the only way out is to change the endings of the book's 8 dark fables into their mirror opposites.

Fortunately, she doesn't have to run this gauntlet alone because she meets the mysteriously familiar Finn, who's as inexplicably drawn to her as she is to him. As they endure horrors beyond imagining, Fate awakens to powers she never knew she possessed and Finn questions his very existence, while an insidious darkness changes him in frightening ways. Ultimately, Fate must confront the faceless evil concealing itself behind the eyes of her one true love or remain trapped within the Book of Fables forever.