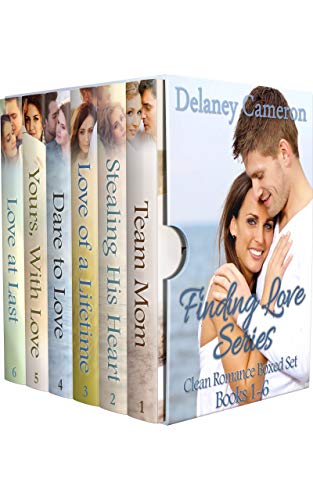 Team Mom
Julie’s calm life is thrown a curve ball when her brother arrives the night before his seven-month deployment asking her to take care of his son. Noting her nephew’s interest in baseball, Julie signs him up for little league. She’s anything but thrilled to find out that his coach is a celebrity.

Stealing His Heart
Just days after her return to St. Marys, Darcy runs into her childhood crush. Given that she was twelve and he was nineteen at the time, it’s not surprising that he doesn’t remember her. Her dreams of him coming back to find her grown up and so beautiful that he can’t help but fall instantly in love with her should have been long forgotten. All he can ever be is a reminder of how much she lost when she veered off the road to avoid an oncoming car.

Love of a Lifetime
Faith's boyfriend has started mentioning the "M" word. Her family and friends are thrilled that she’s finally found someone, pointing out that Ian (the husband she lost in Iraq four years earlier) wouldn’t expect her to mourn him forever. There’s just one problem: Faith isn’t in love with Connor. Feeling pressure from all sides, she jumps at the chance to get away from St. Marys for a few days. Her escape to the Georgia Mountains isn’t supposed to include waking up to find a stranger in her room.

Dare to Love
When Sabrina arrives for a job interview, she never expects to run into the man who broke her heart six years ago. Trent is a painful souvenir of a first love that went terribly wrong. Four months of being unemployed is the only reason she agrees to work for him. For the present, she can’t escape the cruel trick fate has dealt her. There will be no running away from Trent this time.

Yours, With Love
An unexpected inheritance brings Ellen back to her hometown of St. Marys. After an absence of ten years, she never expects to run into Quinn, one of her sister’s old boyfriends and her teenage obsession. If it's true that it's a small world, it's also true that it can be a cruel one. The good-looking eighteen-year-old who touched her young heart is no more. In his place is a man whose life has been torn apart by tragedy and loss.

Love at Last
Working on her grandmother’s house gives Rosemary a reason to escape the media attention of a very public broken engagement. In St. Marys, she hopes to rekindle the music that used to flow easily from her mind to paper and rediscover the girl who’s somehow lost her way. Instead she finds someone who challenges her beliefs about love and tests her resolve to guard her heart.