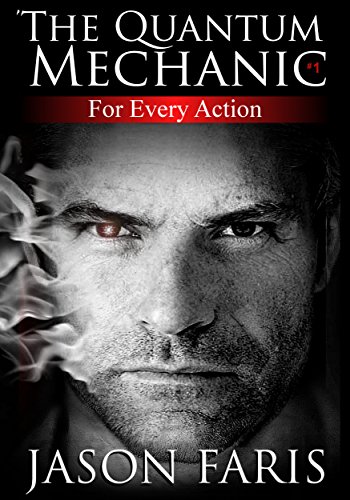 For Every Action: The Quantum Mechanic

To prove that the unified field theory exists in the Bible, Jacob disappears into the Middle East, only to return years later a broken man with a fragmented memory. But when he must act to save his niece’s life he reveals that he can now manipulate the very fabric of reality…

They say that a little knowledge can be a dangerous thing... and sometimes that means knowing a little too much.

Desperate to prove that he has found the unified field theory in the Bible, young mathematics prodigy Jacob Saylor runs away to the Middle East. But when he and his brother venture into the desert they disappear, only to return years later with no memory of where they have been. Jacob's fragmented mind descends into madness and nearly a decade passes before he can find a way to hold onto his sanity. Daily life becomes a struggle and he makes ends meet by working and sleeping in his father's old garage.

Then a group of cybernetic terrorists calling themselves The Embodied attack. Having discarded their humanity for bodies of living technology they serve their masters by secretly manipulating world events, eliminating enemies, and toppling nations. Explosions claim thousands of lives across the country and Jacob watches in horror as his family is lost. But then he sees that his eleven-year-old niece has survived - and something inside of him snaps. She's trying to crawl from the wreckage on broken limbs, and he knows that he's the only one who can save her.

What he does next changes the world as he manipulates the very fabric of reality.

Now The Embodied are seeking him and he will have to overcome the horrors of his past if he is to fight for our survival. But the most terrifying demons he must face are his own, and redemption will mean returning to the source of his torment. Time is running out and the only way forward is for him to face the consequences of tampering in God's domain.

Now the world needs this shattered soul to find a way through his pain to fight for humanity. Can he become what we so desperately need... one last, and final hero?