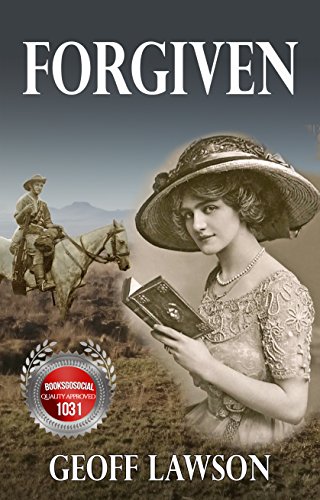 Forgiven is a saga of class-crossed lovers who struggle to keep their relationship alive. Richard volunteers to fight in South Africa to prove he is worthy to marry Rachel, and leaves under a cloud. Then, while waiting patiently at home, she has a frightening experience of her own.

Richard's in trouble. He's wounded, concussed and has a large bandage around his head; he's also a prisoner and surrounded by scowling, scruffy, heavily armed men.

Rachel is intelligent, cultured and charming, but things are not what they seem. The victim of rumour and innuendo she reached a new low in her life, but with Richard's help things began to improve, until in a desperate attempt to prove his worth, he volunteered to fight in South Africa and left her under a cloud.

Once in South Africa, Richard is drafted into an intelligence group whose job is to hunt down a dangerous freelance saboteur. Richard is mugged and almost blown up, and although they manage to smash a cell, the elusive mastermind remained at large. Until...Richard must protect a beautiful woman and von Smidt and Richard come face to face

Meanwhile, while Richard is fighting in Africa, Rachel has problems at home, when a wayward brother becomes indebted and skips without paying the loan. Then, Rachel is kidnapped and ransomed for the debt....