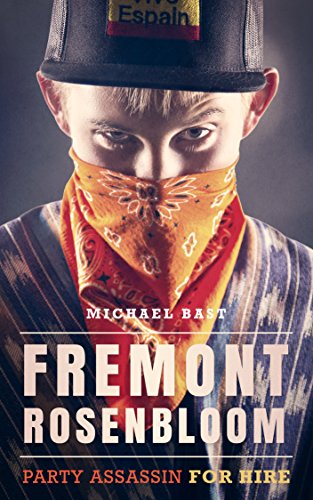 What would make a 17 year old kid start a business where you can hire him to ruin special occasions?
Don't judge Fremont yet. He's got one wild story.

At first, you won't like Fremont Rosenbloom. What he does for a living is rather detestable. Let's say you have an ex-husband getting remarried, or perhaps your slave driver boss' son's birthday is coming up. If you want the occasion to be remembered, you call Fremont. Ruining special occasions is his specialty, in fact you could say it is his art. But please withhold judgment. Fremont has a story.

You see, Fremont's dad abandoned him. He left in the dead of night, not to be seen again. As a parting gift, Fremont's father left him a motivational voice mail on their answering machine, reassuring Fremont it wasn't his fault he was being left behind. He also left him the deed to their small house, and enough money to make it to his eighteenth birthday. Fremont's father asked him to consider it a 'great adventure'. As you might imagine, Fremont started to spiral.

He latched onto his crusty next door neighbor Modesto, a gambling addict with a pension for the black jack tables. Modesto wasn't much, but he was the closest thing to a grandfather Fremont could muster. He became family.

With Modesto's help, Fremont's money soon evaporated. Bills became due, and his adopted grandfather Modesto, was going to lose his house. Fremont couldn't bear the thought of losing someone again. Fremont stepped up. After school he began working at the local pizza shop, but it wasn't enough. No one was willing to pay a sixteen year old what he needed to keep Modesto and himself afloat.

It was at around the same time, he discovered he had a knack, and flair for elaborate schemes. He saw a business opportunity, and he jumped at it. He became a 'party assassin' for hire. But as you can imagine, this brought on a whole new set of problems.