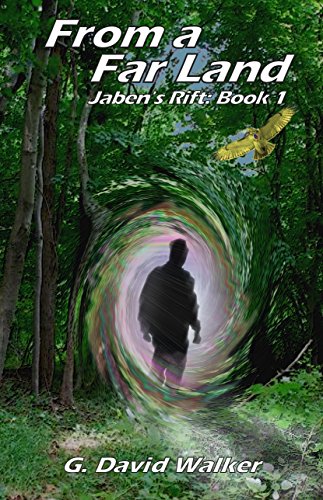 From A Far Land: Jaben's Rift

Jason Bennett’s arrival in Teleria, an extraordinary world of might and magic, sets the wheels in motion on events that will change that world forever. Now, he must learn to use power he isn't convinced he has, keep from triggering a potentially devastating war, and simply stay alive.

Jason Bennett never intended to change the world, his own or anyone else's. But when an ordinary family vacation sends the teenager to Teleria, an extraordinary world of might and magic, his arrival sets the wheels in motion on events that will change that world forever.

In Teleria, Jason is thought be Jaben, a paradoxical figure from ancient prophecy destined to save or doom the world. Through half-truths and misunderstandings, Jason gets caught in a dangerous tug of war between the ruling Circle of Nine and one of his own ancestors from three hundred years in his past. Adding to his dilemma, he finds himself at the center of a conflict between two of the Altered, a small group of godlike beings, one of whom is secretly aiding Jason's ancestor, violating a Covenant that has kept Teleria safe from their influence for over a millennia.

Unable to return home, Jason must learn to use power he isn't convinced he has, keep from triggering a war between the Altered that could devastate the planet, and survive the plans of some among the Circle who believe the prophecy calls for his death.

Not quite the summer vacation he had in mind.