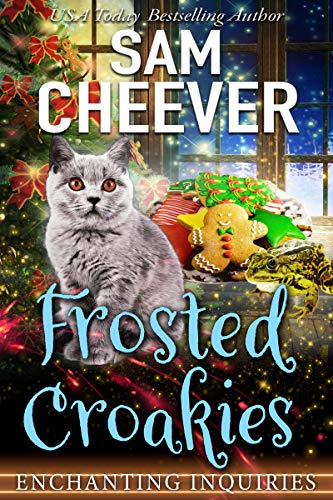 It’s Christmas time at Croakies. The tree is up. The stockings are hung. And Christmas tunes are making me jolly. This can only end badly.

It's Christmas time at Croakies. The tree is up. The stockings are hung. And Christmas tunes are turning the atmosphere jolly. After a tumultuous Samhain, I've found my chi again and I'm starting to enjoy the season of love and giving.

Yeah. You probably know how this is going to end.

When Sebille suggests I open the bookstore up to a small holiday party, I foolishly agree. How was I supposed to know that the hobgoblin would decide it would be fun to hide everybody's stuff? Or that we'd be hit with a freak winter storm that confined everybody inside for the duration. Or that a "You're me but who am I?" spell would be released inside the shop, switching everybody's identities and creating general chaos and hysteria?

I could probably deal with all that if it weren't for the fact that my friend, Lea…the one person who could possibly reverse the spell…was ensconced in SB the parrot, with no opposable thumbs for spelling.

And me? Of course, I'm sitting fat and squishy inside Mr. Slimy. Thank goodness Rustin isn't currently in residence, or it would be really crowded in here.

Who spelled my party? What do a pair of Santa's elves have to do with it? And why have old enemies suddenly become new friends? I apparently have a little holiday mystery to solve inside Croakies, and I have no idea how I'm going to solve it with everybody mixed up and some of us human.

Have I told you I hate this season?