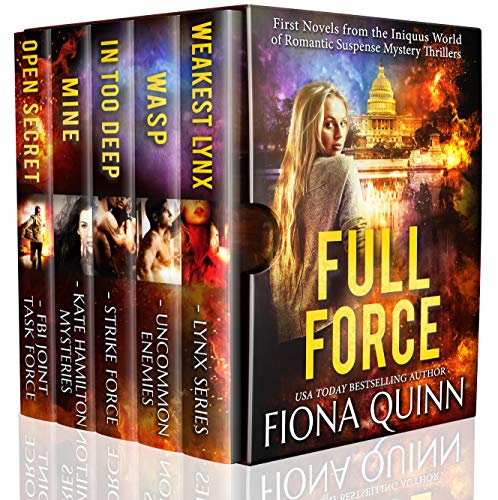 Full Force: First Novels from the World of Iniquus

Here are the first novels from the first five Iniquus Series:

What she wanted was a simple life. What she got was simply terrifying.

A madman forces his way into Lexi's home.

Her survival means she is the only one who can identify the stalker. Lexi becomes the critical witness who holds the key to stopping the serial killer, terrifying Washington families.

Striker Rheas, an ex-Navy SEAL, and his team of expert operators are charged with protecting Lexi.

Striker knows Lexi is keeping secrets and protecting her is not going to be an easy task if he's missing vital information, and losing his heart to her.

With her psychic antennae tuned in, time is running out.

Zoe knows the secrets, now they're coming for her.

The enemy will stop at nothing to get to Zoe and the military secrets that could change everything. What Zoe knows is getting people killed. Is she next?

Gage is a hardened Marine special forces operative with only one soft spot: Zoe.

Her desperate screams echoing from inside her home switch his instincts from lover to guardian. To keep America safe, to protect the love of his life, Gage is coming full throttle.

Take a thrill ride, weaving through an intricate plot that puts Zoe's scientific mind and Gage's battle-hardened skills to the test. With the safety of the US at stake.

In Too DEEP - Strike Force

Sometimes Trust Can Get You Killed

Retired Marine Special Operator Deep Del Toro watched the newscaster play the video of the woman he loves fighting off the FBI agent and escaping from a murder scene the night before. Now, Lacey's turning herself over to the police. What Deep's practiced eye saw in the video was a highly-choreographed crime. But somehow Lacey had thwarted the professionals' plans.

She is in imminent danger.

Enmeshed in a mystery that includes the FBI, the CIA, and a tangle of interconnected international crimes, Deep and Lacey work to discover who plays the good guy and who plays the bad guy in a gray world where right and wrong easily overlap.

Lives depend on them.

Mine - A Kate Hamilton Mystery Novella

A sleepy town in southwest Virginia wakes up to a nightmare of untimely deaths.

Not safe at home in Boston, science teacher Kate Hamilton seeks refuge in the small Virginia town where she was born and raised.

Scarborough is no longer the bucolic village that she remembered. Pleasantries are only skin deep as big city issues and the politics of the world roil just under the surface.

A string of untimely deaths has the whole town grieving.

Kate is determined to solve the puzzle and save lives, especially her own.

280 characters can destroy a nation.

Avery Goodyear, a romance editor from the suburbs, becomes a player in an international game of psychological warfare.

The FBI watches the attacks unfold in real time. The enemy's strategy: win hearts and minds to destroy American unity. The FBI focuses their secret weapon, ex-Army Ranger Rowan Kennedy, at the crisis. With a PhD in propaganda, Kennedy risks his life to expose the wealthy oligarchs and high-powered schemers threatening our way of life, and to protect Avery. Download this boxed set and join the Iniquus family as they fight for America's safety and the people they love.