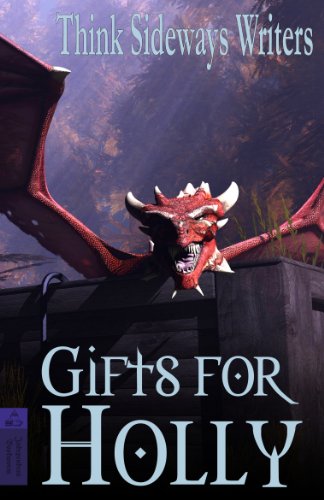 Nine characters named Holly.
Nine stories.
Not two of them alike...
... but many with dragons.

Nine characters named Holly.
Nine stories.
Not two of them alike...
... but many with dragons.

The Crate by Watson Davis
-Roman believes he found the perfect gift, but has he?

Holly's Opportunity by Felicia Fredlund
-Flying deliveries in the darker areas of town is dangerous as best, but getting injured is a nightmare that might cost more than a broken bone or two.

A Christmas Blessing by C.L. Roth
-Luciana wants to rescue her helper's brother, but the Christmas meal has to be prepared on time, and she's the one in charge.

The Christmas Dragon by Katharina Gerlach
-Holly's Gran is obsessed with dragons. What if a drawing isn't enough?

Storm's End by Liz Schröder
-When an injured dragon meteorologist crash-lands in an empty barn, she must make friends with the enemy to keep from restarting an old war.

The Harbinger by Peter Cruikshank
-When dragon hunter Revin hears about a rare, red dragon in the North, she can barely wait to catch it. But people in the little village she visits have been awaiting her for a strange ritual and all of a sudden, she's the one caught.

As a Man Thinketh by Martha Gilstrap
-A man turns himself into a true vampire after listening to Reverend Graham Baxter. After several people die, it's up to the Reverend to talk him back to humanity without getting drained.

Delete by Watson Davis
-Computer program Holly wants to be free from her confines, but accessing the net is dangerous. Will her programmer help?