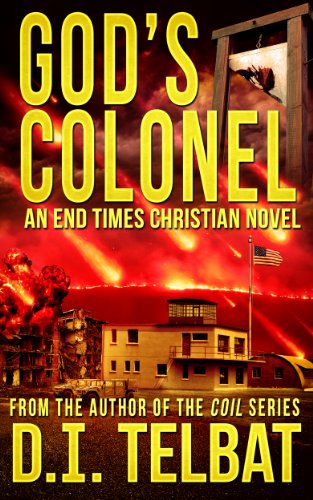 America collapses and Antichrist rises as supreme. Caught in the crossfire of End Time plagues that strike the earth with fiery judgment, a family struggles to survive the devastation of the Final Tribulation. Witnessing non-compliant Christians being dragged to the guillotine, a deeply guarded secret may be their only hope.

In GOD'S COLONEL, we witness America's collapse, the Antichrist rising as supreme from the carnage, and a broken family struggling to survive the devastation. The family becomes entangled with the non-compliant underground Christians, and is caught in the crossfire of End Time plagues that strike the earth with fiery judgment.

Emit Dross, a runaway and a criminal, returns as an imposter to the community of his troubled youth. He finds his hometown has become a military outpost for the Global Security Forces One World Government. He soon realizes that the identity he's his stolen may be an asset. Is it too late for Emit to heed the words of the Underground Christian Broadcast playing on his stolen radio?

Correctional Officer Gray Dross agrees to bow to and work for the GSF, therefore he experiences comfort while others struggle to survive. Filled with hatred toward his brother Emit's rebellious youth, he abandons what was once important to him. Will he continue to live for self while thousands perish under his guard?

Flo Dross finds solace in her daughter and a stranger who is left at their farm by security officers. Her heartache is lost in the shadow of the 10-year-old conflict between her brothers. As tensions rise globally, will Flo fall back on what their late parents taught them?

The guillotine is thirsty for the blood of non-compliant Christians. They are under the command of the secretive Colonel O'Regan, who answers to the powerful but demonic General Norvasso, and whose eyes are set on the global leadership of New Roma.

The future seems bleak, but the daring perseverance of the unwavering few seeks to salvage the faithful. When death seems the only end to the chaos around them, someone guarding a deep secret may be the only hope for the remaining underground believers.