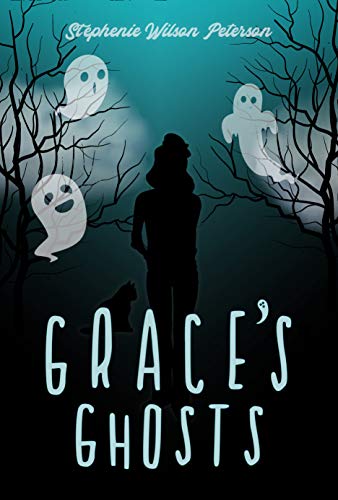 Grace has friends. They just lack heartbeats.
It's a good thing Grace isn't afraid of ghosts. Her town is overridden with them. Her cat, Midnight, is a ghost. All of her friends are ghosts, and she's the only person who can see them.
When her ghostly friends ask for her help, Grace has to break a curse, uncover a magical mystery, and avoid a mean girl, all while dark forces stand in her way at every turn. Can Grace help her friends before it's too late?

Twelve-year-old Grace and her feline best friend, Midnight, have a secret: Midnight is a ghost. But then again, so are the rest of Graces' friends.
Since she's the only person in hundreds of years with the ability to see them, the many ghosts of Tansy have flocked to Grace since birth. She doesn't mind. She prefers the company of the dead to that of the cliquey kids at school.

Grace is happy with her strange life, until one day, the ghosts tell her about the secret her town has hidden for centuries. There's a reason there are more ghosts than living people in Tansy. Three-hundred years ago, a lonely witch cast a spell that mistakenly trapped the soul of every person to ever set foot in the tiny town. So when the spirits beg her to find a way to break the curse, Grace is eager to help.

As she searches for answers, Grace makes discoveries about the secret her family hid for generations and a world of magic hidden in her own backyard.

Grace soon realizes that if she succeeds in breaking the curse, she'll lose Midnight and all of her ghost friends, but if she fails, everyone living in Tansy will face the same fate. Can Grace break the curse before it's too late?