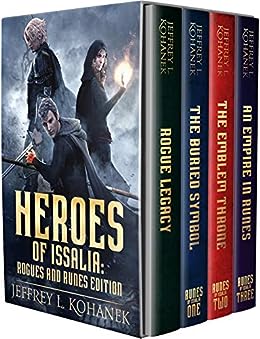 The return of a long lost magic. A desperate quest for an enchanted relic. The final battle to save mankind from extinction. Includes the COMPLETE Runes of Issalia trilogy and the prequel, Rogue Legacy.

Or so he believes.

Brock's compassion and gregarious nature draw others toward him, forming a squad who will become the hope against a tide of destruction.

Ashland is training as a magic-based healer until she discovers the secrets the Ministry is protecting. Intelligent and determined, she will go to extreme measures to ensure a better future.

If only she can escape her troubled past.

Cameron is an imposing warrior with legendary bloodlines and the desire to become the greatest swordsman who has ever lived. His calm demeanor and courage make him a rock that others can lean on.

But can he escape his father's shadow?

Benny is an engineer whose optimism is surpassed only by his brilliance. His inventions amaze his peers and superiors. When he combines magic with science, he changes his world forever.

If only he realized the destruction he would cause.

Parker -- the son of a powerful Empire leader -- is on a path to follow in his father's footsteps. However, his desire for independence alters his future.

What will the man do when Parker chooses his friends over his career in the Ministry?

Lyra is a rogue and a survivor, overcoming every obstacle in her path until she stumbles across a plot for world domination.

Her tenacity might be the only thing that can reshape destiny and create a new legacy.