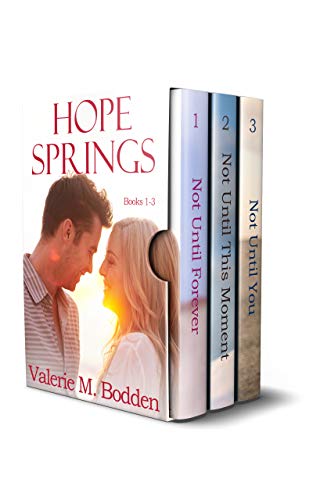 “I fell in love with the town, the characters, and this author's writing.”
Welcome to Hope Springs, where you’ll find faith, forgiveness, love, and the promise of forever. Three fast-paced, emotional Christian romances that will touch your heart and leave you breathless with the power of true love.

Not Until Forever: Sophie knows she did the right thing when she declined Spencer's proposal five years ago. So why does seeing him again stir up old feelings? Spencer promised himself he wouldn't fall for Sophie again. But there's something different about her now. Something that makes him think maybe God is giving them a second chance...

Not Until This Moment: Peyton thought Jared was "the one"—until he told her he never intended to get married. Jared wishes he could give Peyton everything she desires. But marriage is the one thing he can never offer her. When they're thrown together again on an annual ski trip, both have to reexamine what they want. Because it's just possible God has other plans for them...

Not Until You: Three years after her husband's death, Violet is sure her chance at happily ever after is over. Until Nate moves in next door and stirs feelings she thought had died with her husband. But when Nate reveals a devastating secret, they have to decide: should they walk away, or trust that the God of second chances has a plan for their future?