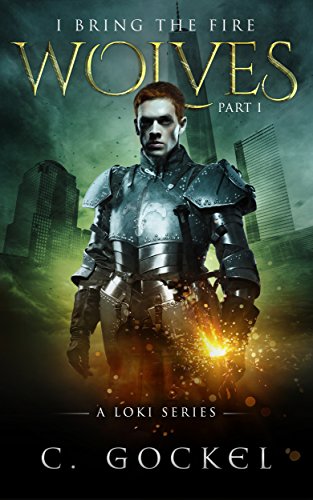 I Bring The Fire: Wolves

When Amy prays for help, Loki the Norse God of Mischief and Chaos isn't the savior she has in mind. Loki can't ignore Amy's summons, but he can insist she help him outwit Odin, leader of the Nine Realms. An epic urban fantasy with myth, magic, and mayhem!

Amy Lewis is on her way to her grandma’s house. She's being chased by a very bad wolf.

Galaxies away Loki, Norse God of Mischief and Chaos, is waking up in a prison cell, strangely without a hangover, and with no idea what he’s done wrong—this time anyway. He does know Thor is hiding something, Odin is up to something wicked, and there seems to be something he’s forgotten...

Amy's and Loki's fates are about to collide. They'll have to work together to defeat gods, elves, magic sniffing cats, and nosy neighbors. If Loki can remember what he’s forgotten, and Amy can convince him not to be too distracted by Earthly gadgets, Earthly pleasures, or three day benders, they just might pull it off...