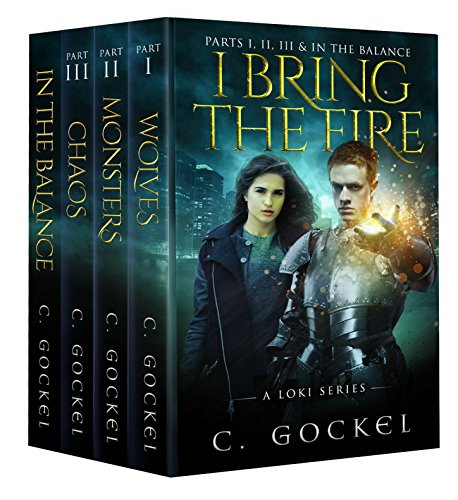 When Amy Lewis prays for a savior, Loki isn’t who she had in mind. Can a nice Midwestern girl trust a so-called God of Chaos? Can he even trust himself when an old evil is calling to him from beneath Chicago’s streets?

When Amy Lewis prays for a savior, Loki Norse God of Mischief and Chaos isn't who she has in mind. Loki can't resist Amy's summons, but he can insist she help him outwit Odin, ruler of the Nine Realms.

This box set contains the first three installments of I Bring the Fire plus In the Balance. It is perfect for fans of The Dresden Files and Terry Pratchett.

Wolves: I Bring the Fire Part I
In the middle of America, Amy Lewis is on her way to her grandma's house. She's being chased by a very bad wolf. Galaxies away Loki is waking up in a prison cell, strangely without a hangover, and with no idea what he's done wrong -- this time anyway. But he does know Thor is hiding something, Odin is up to something wicked, and there seems to be something he's forgotten.

Monsters: I Bring the Fire Part II
After being attacked by a serial killer, saved by Loki — so-called God of Mischief, Lies and Chaos — dragged to Alfheim, losing every cent in her bank account, and caring for her grandmother, Amy Lewis has lost her scholarship to veterinary school.

Chaos: I Bring the Fire Part III
In this final installment of the Cera story arc, the noose around Loki's neck is tightening. Gerðr, the frost giantess, wants him dead; Cera, the World Seed, wants his head—literally and figuratively; the FBI wants him in Guantanamo; and an old friend from Asgard wants to bring him home...whether Loki likes it or not.