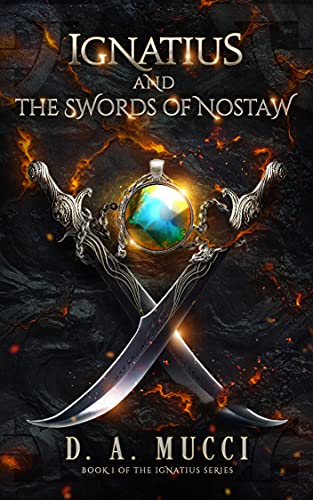 Ignatius And The Swords Of Nostaw

Iggy is ready for his first days in high school...But is he ready to face mythical creatures, dark magic wizards, or sword fights, where people actually die?

The towering stone Castle Maol, the unrivaled seat of power in the Kingdom of Skye, sat inland almost bereft of life.
Once known for its inspirational beauty, Skye’s forests and meadows were more barren than green now, enveloped by stillness instead of bustling wildlife. Lakes and waterways once teeming with marine life lay stagnant. Most of those who lived here survived under gray clouds of despair.
Several of the eldest knew of the prophecy that would return the land to its prior golden age and quietly hoped it was true.
Only a handful knew the secret that would allow the prophecy to come true. They refused to speak of it.

Fifteen-year-old Iggy is good at three things: languages, witty retorts, and running from a fight. When a guy pulls a knife on him during a high school argument, all the banter in the world isn’t enough to save him, so Iggy resorts to his backup plan—running. But before he can make his escape, the locket he always wears around his neck heats up, and someone tackles him from behind, pinning him to the ground.

Iggy’s never thought of himself as a fighter. He’s spent his life running from anything that can’t be solved with a quick one-liner or a snarky comeback. But as he learns more about the strange place he’s landed, one thing becomes abundantly clear: in the World on Skye, they need a hero. And Iggy just might be the one they’re looking for, even if he’s not so sure.