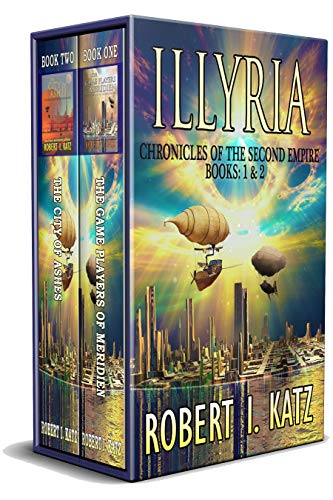 By: Robert I. Katz

The people of Illyria were genetically modified to be soldiers, stronger, faster and smarter than normal humans, and Douglas Oliver is one of the best, but the Empire fell 2000 years ago. Now, a new Empire is rising among the stars, and the Empire has set its sights on Illyria.

The First Interstellar Empire of Mankind has been gone for 2000 years, but its legacy remains, scattered across the stars. On some worlds, civilization has collapsed. On others, mankind has thrived. On still others, humanity has died out, or mutated into forms that their ancestors would never recognize as human.

Illyria was intended by the Empire to be an incubator for the best soldiers in the galaxy, genetically engineered to be strong, fast, smart and aggressive. Thousands of years later, the people of Illyria relish competition of every sort, and playing games is in their blood.

In The Game Players of Meridien: Douglas Oliver is successful and ambitious, but he is nowhere near the most powerful player in the Game. This does not disturb him. Douglas Oliver is young. He has plenty of time. He understands the rules and he’s not afraid of being challenged, until a challenge arrives from an unknown agent and suddenly, the Game is no longer just a game. It’s an all-out war for survival, with Douglas Oliver at its center.

In The City of Ashes: Douglas Oliver has survived the siege of Meridien, but now, a new challenge awaits. The Grand Tournament of Gath takes place every five years, where the best and brightest from all over the world fight for riches and glory. Douglas Oliver has been invited to participate, but the real battle won’t be fought with fists or weapons. It’s a game of words and diplomacy. Behind the scenes deals are being struck. Sides are being chosen, and betrayal is in the air.