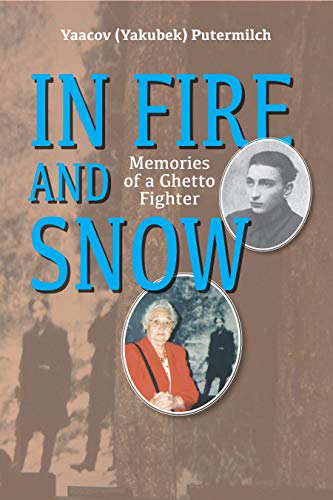 In Fire And Snow

"In Fire and Snow" is the unique memoir of Yaacov Putermilch, who throws light on the life in the Warsaw Ghetto as a member of the Jewish Combat Organization and the dramatic events that occurred During this heroic uprising.

A unique Memoir of the Warsaw Ghetto fighter

"The Germans marched, and their singing echoed between the walls. That same moment, we were ordered to attack the marchers, to throw bombs at them and then grenades and Molotov cocktails. When the air cleared, we saw German blood on the pavement. This was our finest day."

In his book "In Fire and Snow," Yaacov Putermilch describes his life in the Warsaw Ghetto as a member of the Jewish Combat Organization (JCO).

The Warsaw Ghetto uprising was set off by combatants and commanders of various Jewish youth movements in several foci throughout the Ghetto. Together with the stories of other witnesses, Yaccov's testimony completes the historic picture of the Warsaw Ghetto uprising and throws light on the dramatic events that occurred in the specific sector where he fought.

After the Ghetto was destroyed, Yaacov escaped to the forests and continued to fight as a partisan. The partisans wrote an important chapter in the history of anti-Nazi resistance. They struggled to survive but went on fighting the Nazi enemy, no matter the cost.

Today, more than 75 years later, this historic document acquires double importance as the number of living witnesses is gradually decreasing, while more and more people deny the Holocaust and attempt to re-write its history.