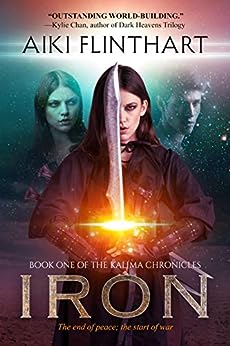 On a colony-world with no iron, the discovery of an iron deposit will threaten Madina's peaceful feudal society. Caught in the middle and framed for murder, Alere Connor, failed telepath but skilled swordswoman, sets out to discover her family's bloody history...and try to stop a war.

Kalima, an Earth-colony world with little iron ore and no fossil fuels, is entrenched in a peaceful feudal society. The Jundom of Mamalakah is ruled by the ambitious Hanna Zah-Hill, wife of the Jun First. Deep in debt, she wants technological progress. But Mistress Li, leader of the Xintou House, prefers to keep the status quo. And has the power to do so.

When Alere Connor – failed xintou-telepath but skilled swordswoman – is sent by Xintou House to act as mistress to Jun First Radan Zah-Hill, she unwittingly triggers a revolution against the House and against the throne. On his deathbed, Radan reveals the existence of a hidden iron deposit. With several factions vying for political domination of the Jundom, control of the iron would tip the balance of power.

Alere is accused of the Jun First's murder and flees for her life. She must reach and warn the Jun Second, Rafi Koh-Lin, on whose lands the iron ore lies. If she fails, all-out war is inevitable - the first ever war in the seven hundred year history of Kalima.

On the way, Alere will uncover the old and bloody secret of her own existence; the reason for her failure as a xintou-telepath; and unlock and even darker future for herself and her companions.
But only if she survives.