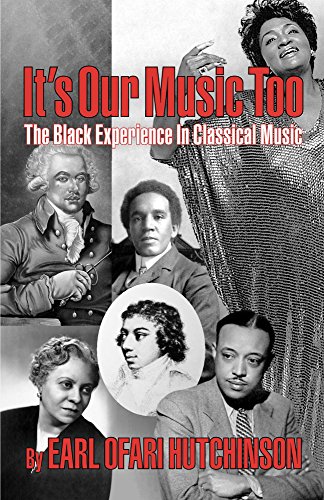 It's Our Music Too: The Black Experience in Classical Music

Earl Ofari Hutchinson meticulously details in his It's Our Music Too The Black Experience in Classical Music the black impact on classical music.
Hutchinson notes that there are numerous books which have dissected and re-dissected every possible aspect of classical music—the composers, performers, their compositions, the musical structure, the history, and even the gossip and minutiae about the composers and performers. Yet, there are almost no books that focus on the significant part that black composers and performers played in influencing and in turn being influenced by classical music

"The list of Africans, African-Americans and Afro-European composers, conductors, instrumental performers, and singers," says Hutchinson, "is and always has been, rich, varied, and deep. Sadly, the recognition of this has almost always come in relation to the work of a major European or white American composer."

Hutchinson's aim in It's Our Music Too The Black Experience in Classical Music is not to update a book on blacks and classical music, or list the many notable individual breakthroughs of top flight black classical music performers and composers through the years. Instead he tells the story of how blacks have actually influenced the development, history and structure of classical music in its major varied forms; opera, chamber pieces, symphonies, and concertos. It's a story that's filled with tragedy and triumph, heart break and heroism.

Hutchinson gives an exciting and entertaining glimpse into Mozart's "borrowing" a musical idea from the black violin virtuoso Chevalier Saint-Georges in the eighteenth century, Dvorak's basing a major part of his New World Symphony on Negro Spirituals in the nineteenth century, and composers such as Gershwin, Copeland. Stravinsky and Ravel, wildly embracing jazz and blues in some of their popular and acclaimed works in the twentieth century. It's Our Music Too The Black Experience in Classical Music is a fast paced, reader friendly, easy to understand look at just exactly what and how the greats in classical music have borrowed from and paid homage to jazz, blues, ragtime, boogie woogie and Negro spirituals.

"Throughout I name and recommend many pieces to listen to by the greats of classical music," notes Hutchinson, "who were directly inspired by black musical forms as well as the works of black composers who have written exceptional works that have influenced the works of other classical composers."

Hutchinson also tells how black performers such as Roland Hayes with his unique interpretations of German leider, and Marian Anderson and Jessye Norman with their distinctive tones and vibrant, fresh renderings of, and subsequent path breaking performances in the major works of opera giants, Giuseppi Verdi and Richard Wagner have greatly altered how these master's works are heard today.

It's Our Music Too The Black Experience in Classical Music, takes the reader on an exciting, eye opening, and revealing journey through the world of classical music in which the major critics, composers and performers tell in their words their appreciation of the major contribution blacks made to classical music.

"It is no exaggeration or overstatement to say that classical music does owe a debt to the black experience in classical music," says Hutchinson, "And the goal is to show music lovers and readers how that debt continues to be paid in concert halls everywhere."