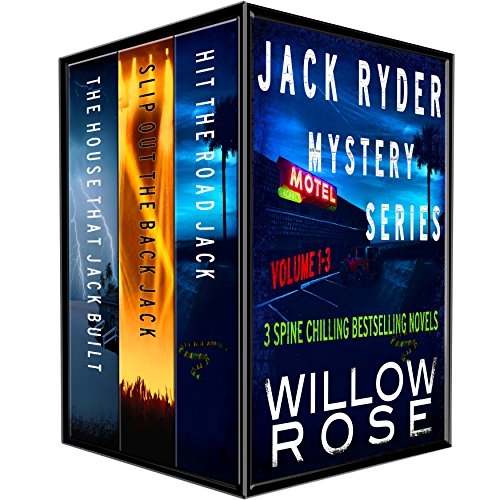 First 3 books from Queen of scream! A Jack Ryder Mystery Series Vol. 1-3:
- HIT THE ROAD JACK
- SLIP OUT THE BACK JACK
- THE HOUSE THAT JACK BUILT

First 3 books from Queen of scream! A Jack Ryder Mystery Series Vol. 1-3:
- HIT THE ROAD JACK
- SLIP OUT THE BACK JACK
- THE HOUSE THAT JACK BUILT

Ben should be in school. It's Monday morning but his parents haven't woken up yet after a night of heavy drinking. Ben waits patiently, even though he knows he is missing out on today's field trip to the zoo. But, when his black Labrador suddenly runs upstairs and comes down with a finger in his mouth, Ben knows he's not making it to school today at all.

Detective Jack Ryder is chaperoning his kids' field trip when he gets the call from the head of the Cocoa Beach Police Department. A body has been found and they need his help. Soon, Jack finds himself up against a killer, a predator who ruthlessly chases women and kills them so they can never leave him. The case soon causes serious consequences for him and his family once the truth is revealed.

With her new hero, Jack Ryder, as a loving father and committed detective, a new location in tropical Florida, and a story that moves at an incredible pace, Hit the Road Jack is Willow Rose at the top of her game.

- SLIP OUT THE BACK JACK:

They take turns with the knife, cutting their thumbs open. A drop of blood lands on the dark wooden table. Eyes meet across the room. All four thumbs are pressed against each other one by one. Blood is shared, secrets buried.

Years later a brutal madman sprays bullets into a crowd at a movie theater in Miami and sends a chill through the entire nation. When human remains are discovered in the dense forest next to a biking trail in Brevard County, it is only the beginning of a series of gruesome murders, which will shock the entire Space Coast.

Detective Jack Ryder is preoccupied with Shannon King and the strange email she has just received that leaves her terrified just as she prepares to go on stage at the Runaway Country Festival. Jack Ryder senses the connection and soon he realizes he is on the hunt for a serial killer with a killing spree that spans over more than a decade.

It's spring-break in Cocoa Beach "" and evil is lurking everywhere.

Slip out The Back Jack is the second novel in Willow Rose's series about Jack Ryder, a devoted father and committed homicide detective.

- THE HOUSE THAT JACK BUILT:

Scott Kingston is afraid of monsters. He thinks they're lurking outside his bedroom window at night when his mother tucks him in. He asks his mother to keep the light on to scare the monsters away. But that light is exactly what lures the kidnapper to his window and the next morning, Scott Kingston is gone.

Twenty-eight years later, Vernon Johnson is released from jail after spending the biggest part of his life on death row, convicted of having kidnapped and killed Scott Kingston. As so many times before, he has appealed his case, but this time, the judge decides to let him go. A witness has finally told the truth, and there is no longer sufficient evidence to keep him in jail.

But shortly after Vernon Johnson is released and has returned to his childhood town, another child disappears, and soon all eyes are on him""again.

Jack Ryder is getting ready to build the house of his dreams, while hoping that Shannon won't end up in jail for the murder her ex-husband committed. She is expecting their child and the pregnancy, along with the worrying, takes a toll on the both of them, especially when a dark secret is revealed about the lot where they are preparing to build their house.

The House that Jack Built is the third novel about Detective Jack Ryder and his girlfriend, the country superstar, Shannon King.