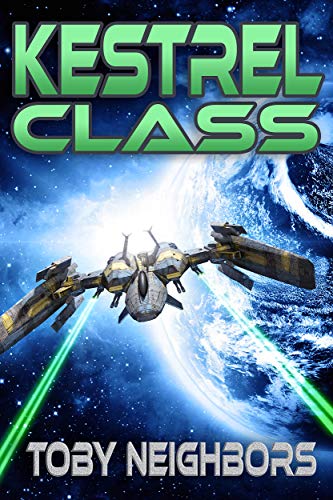 Buried deep in the salvage fields, hidden by mounds of rubbish, lies a Kestrel class starship. And after a decade of tireless work, she’s almost ready to fly. Self taught engineer Ben just needs is a pilot and some luck.

For self-taught engineer Ben Griminski, life is perilous and hard. Living on the junk world of Torrent Four, Ben scours the vast fields of trash, wreckage, and derelict ships in search of anything of value while avoiding the Salvage Scalpers, a gang that takes whatever it wants and enslaves anyone with a knack for finding valuables in the endless mounds of trash. For many people in his position, life is unbearable, but Ben has a secret. Buried deep in the salvage fields, hidden by mounds of rubbish, lies a Kestrel class starship. And after a decade of tireless work, she’s almost ready to fly.

The Royal Imperium rules the galaxy with an iron fist. Freedom is just a dream on the hundreds of worlds under their domain. But in space, a person with a fast ship, an able crew, and the right connections can enjoy the last vestiges of liberty, as long as they stay under the radar. Ben Griminski has a ship, but he’ll need a crew and plenty of Zexum to fuel her if they hope to escape their dreary lives on Torrent Four. It’s a challenge worth taking on, and if his luck holds, he might just discover what life is like among the stars.

Kestrel Class is the first novel in a new science fiction saga by master storyteller Toby Neighbors. Drawing inspiration from Firefly, The A-Team, and even Star Wars, Kestrel Class is a fast-paced mix of action and character-driven drama. Take the pilot’s seat in the Modulus Echo, join the crew in a heist for fuel, and learn just how depraved the Imperium has become to ensure unquestioning obedience from the masses under their control.