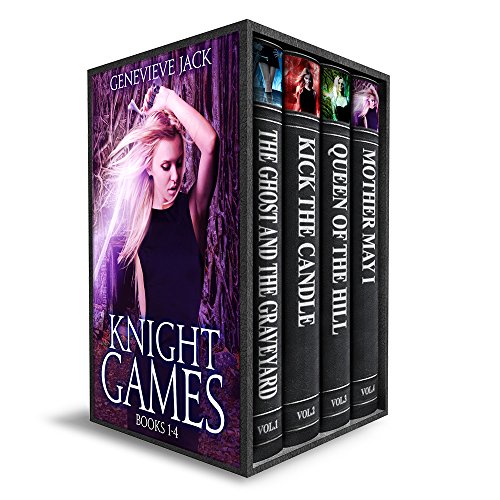 Magic can be deadly in the wrong hands, but love can be even deadlier in the right ones.
A young nurse with budding witchy powers moves into a rent free home on the edge of a graveyard where she becomes entangled in a love triangle with the gorgeous cemetery caretaker and the ghost who lives in her attic.

Magic can be deadly in the wrong hands, but love can be even deadlier in the right ones.

A young nurse with budding witchy powers moves into a rent free home on the edge of a graveyard where she becomes entangled in a love triangle with the gorgeous cemetery caretaker and the ghost who lives in her attic.

The Ghost and The Graveyard, Book 1
Grateful Knight isn't looking for love when she moves into a rent-free house on the edge of a graveyard. At twenty-two, all she wants is to recover financially so she can move back to the city where she belongs. But sparks fly when the gorgeous cemetery caretaker, Rick, introduces himself and mentions his suspicion that her new house might be haunted. Her attraction to him seems supernatural, and despite her resolve to not get involved, she literally can't keep her hands off him.

When things in Grateful's house start moving on their own, another man enters her life, Logan, a sexy ghost with a dark secret. He says Rick isn't what he seems, and indulging her passion for him could cost her soul. One thing's for sure, magical forces are at work in the tiny town of Red Grove, and they're converging on Grateful. Life will never be the same once she's forced to choose between the ghost and the graveyard.

Kick the Candle, Book 2
Commitment phobic Grateful Knight has her hands full. While she struggles to understand her new role as Monk's Hill Witch, evil isn't waiting for her to come up to speed. Not only is there an increase in supernatural activity in her ward, she's being evicted from her home, breaking in a snarky new familiar, and trying to sort out her feelings for her metaphysically connected and immortal boyfriend, Rick.

When Grateful foils a murder at a fae bordello, she uncovers a plot by a local vampire coven to obtain a secret weapon with the power to control both the living and the dead. History is threatening to repeat itself. And if Grateful doesn't give herself over to her role completely, it could cost her everything.

Queen of the Hill, Book 3
After saving her caretaker, Rick, from certain death, Grateful Knight is ready for their happily ever after. The date is set and wedding plans are in the works. But when the witch responsible for the candle that almost ended Rick's life shows up in Red Grove expecting payment, the price is more than Grateful can bear.

To make matters worse, Logan is barely speaking to her, and a murder at the Thames Theater leaves everyone reeling over the future of Julius's vampire coven. She's finally ready to walk down the aisle, but first Grateful must face the greatest challenge of her life.

Mother May I, Book 4
Grateful Knight is one stressed out witch. Not only has she failed to restore her caretaker, Rick, from an evil witch's mind-control spell, but the loss he endured extends well beyond his memory. To make matters worse, compensating for his absence could cost her the job she loves and the strength she needs.

When a new supernatural threat leaves Grateful for dead, a vampire ally saves her life but at a price. Her assailant's calling card makes it clear she's marked for death, possibly by her goddess mother. With the help of her half-sister Polina, can Grateful gain the power she needs to win Rick back and beat the goddess at her own game?