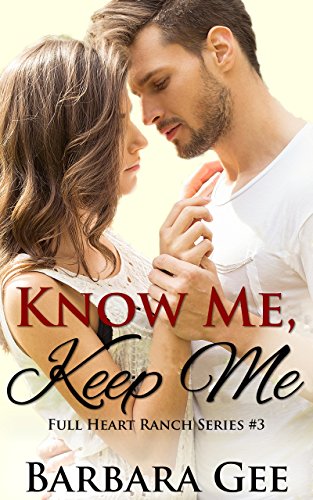 Know Me, Keep Me

Professional hockey player, Boone Kendall, warns the beautiful, bubbly physical therapist against getting involved in his personal drama. Better not to find out things she’s going to wish she didn’t know, especially when it puts her life in danger. But Jolene Tolley is a healer by trade, and she won’t give up. She doesn’t care about his fame or his money, she cares only about him. He knows he can trust her….and like it or not, he soon realizes he needs her.

Boone Kendall made it to the hockey big leagues ten years ago. As captain of his team, he knows all too well that when you play a game at the highest level, the whole 'playing' thing can be misleading. You only play if you put in the hard work. Years of it. Decades of it. You do whatever it takes—and you try to fit the rest of your life in there somewhere.

Boone knows the routine. He lives it…..he loves it…..and then he loses it. Injured and off the ice for the remainder of the season, he heads to the Full Heart Ranch, for reasons only he knows. Because his concussion isn't the only problem he faces. In fact, it's not even the biggest one.

Jolene Tolley is the head physical therapist at the Full Heart Ranch Veterans Retreat Center. When her favorite hockey player decides to volunteer at the Center's brand new ice rink while recuperating from an injury, Jolene is beyond thrilled. Working with a professional athlete is the chance of a lifetime, and she's determined to do her part to get him back on the ice as soon as possible. It's the least she can do for her beloved team.

After spending hours together in the gym every day, Jolene discovers that Boone is dealing with a lot more than just his physical symptoms. She shouldn't care—it's not her problem or her responsibility. But as their attraction grows, her heart won't let her run. She's confident she can help his body heal, but can she help with the bigger problem? Will he trust her enough to let her try?

Boone warns the beautiful, bubbly therapist against getting involved in his personal drama. Better to not find out things she's going to wish she didn't know. But she's a healer by trade, and she won't give up. She doesn't care about his fame or his money, she cares only about him. He knows he can trust her….and like it or not, he soon realizes he needs her.

Decisions don't always come with a winning option—sometimes everyone loses. Sometimes God gives you a responsibility you don't want, but you can't get rid of it. Sometimes you have to fight to get back the game you love. And sometimes, when you're not expecting it and don't know if you deserve it, He blesses you with a person whose love is strong enough to survive it all. That's when you finally get the win.