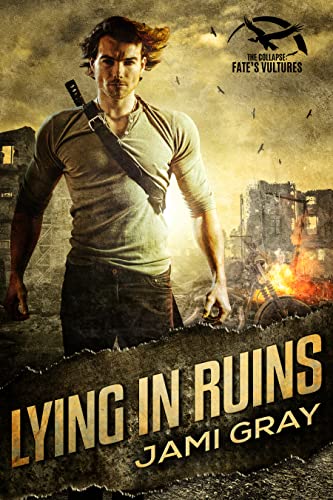 A kidnapped child throws a woman of secrets into the path of a ruthless vigilante in Jami Gray’s post-apocalyptic romance, Lying in Ruins. What will destroy them first—their suspicions or their enemies?

In a world gone to hell, better to choose the devil you know…

The world didn't end in fire and explosions, instead after an intensifying panic of disease, food shortages, wild weather, and floundering economies, it collapsed like slow falling dominoes, until what remained of humanity battles for survival in a harsh new reality.

As a ‘Hound, Charity puts the lethal survival skills learned at an early age to use by sniffing out pivotal secrets for one of the most powerful leaders on what remains of the west coast. Her work is deceptive, deadly, and best performed solo, but when her path crosses with a member of the notorious mercenary group known as Fate’s Vultures, she’s faced with a less than stellar choice – join the sexy as hell Ruin in a mockery of teamwork or waste her valuable time shaking him loose.

As one of Fate’s Vultures, a nomadic band of ruthless arbitrators, Ruin knows well the type of carnage created by the corruption and greed of what remains of humanity, so when he rides into a brutal murder scene and discovers his friend has been taken hostage, he’ll use whatever resources he can to save him. Even if one of those resources is a damn ‘Hound who’s clearly trouble. Trouble, Ruin knows he should avoid, especially since the suspicious circumstance of Charity’s involvement leaves every cell of his body skeptical - and painfully aroused.

But Fate has other plans, especially when Ruin and Charity realize they have a common enemy. Can they set aside their distrust to achieve their mutual goal of justice and revenge?

Sometimes, it's better to stick with the devil you know...