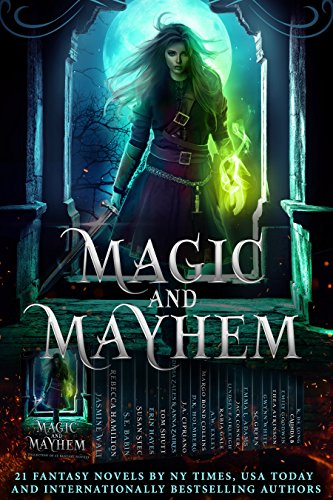 By: Jasmine Walt & Others

Get ready to be swept off into lands filled with magic, mystery, action, adventure and even romance with these 21 full-length fantasy novels! With over one-million words packed with witches, dragons, pirates, shape shifters, mercenaries, gods and more, these stories will introduce you to some of the most memorable characters and exotic worlds that exist in fantasy today.

Burned by Magic - Jasmine Walt
A shifter-mage hybrid must master her powers in order to catch the serial killer who murdered her mentor.

The Sorcery Code - Dima Zales & Anna Zaires
Blaise's magical creation is not an object of sorcery, but rather a beautiful woman who's unlike anything their world has ever seen.

Come, the Dark - Rebecca Hamilton
Even if Cordovae can banish the spirits in time to return home to her daughter, there's still one problem: she's falling in love with a man who can't return with her.

Unbound - Emily Goodwin
The world of ghosts and spirits is nothing new to Anora, but when a group of bounty hunters are sent after her, she realizes she is more than a medium.

Legally Undead - Margo Bond Collins
When she discovers her lawyer fiancé being turned by a vampire, history grad-student Elle Dupree becomes a reluctant hunter, stalking New York City as only a scorned bride can.

Wardbreaker - J.A. Cipriano
Former demon hunter Lillim Callina must decide if staying hidden is more important than saving her new home from the largest vampire infestation she has ever seen.

Chased by Fire - D.K. Holmberg
An ancient artifact that must be found, terrifying creatures from dark and dangerous Incendin, and long-forgotten elementals again unleashed on the world.

Water Witch - Thea Atkinson
A beautiful and formidable water witch must find the courage to defy the men who control her if she hopes to gain her freedom and protect the ones she loves.

Adamant - Emma L. Adams
A sorceress from another universe blamed for a murder she never committed must join forces with the guard who arrested her, before they become the next targets.

The Sunken - S.C. Green
In an alternate Georgian London where dinosaurs still walk the earth, Nicholas and his friend - the brilliant engineer Isambard Kingdom Brunel - must stop the king's plot to bathe London in innocent blood.

Heart of the Kraken - A.W. Exley
A disillusioned pirate must decide if he will defy his captain and wield the dreaded kraken to save a trapped mermaid, but freeing her will shatter his world.

The Atomic Sea - Jack Conner
In a time of world war, one man will be pressed to unlock the secrets of the Atomic Sea, or the whole world will be plunged into nightmare.

Rebel's Honor - Gwynn White
Forced into an arranged marriage, warrior princess Lynx is on a crusade to destroy her betrothed, his all-powerful guardsmen, and his evil empire, little realizing that he has magic on his side, which could easily end up destroying her.

Echo in Time - Lindsey Fairleigh
When an ancient mystery leads an archaeologist to a millennia-old war between god-like beings, she must choose between the father she's never met and the man she's fated to love.

The Hunt for Snow - S.E. Babin
With her homeland being destroyed by evil magic, Snow must put aside her fear and pick up her weapons to engage in a war to save those she loves.

They're So Vein - Susan Stec
There are rules and a hierarchy for immortal beings, and as five senior women go from depends to thongs, and dentures to newly acquired fangs, they tromp stilettos all over them.

Chameleon - K. De Long
When demonic intrigue forces a shifter to hide out as a dog, the woman who "adopts" him will be forced to confront her family's sorcerous past to have a hope of protecting him.

Brooding City - Tom Shutt
Detective Brennan has hung up his hat as a Sleeper, but when a violent drug lord threatens his city, the shadows of Brennan's past catch up to him--and they're looking for blood.

Death is but a Dream - Erin Hayes
In order to be brought back to life, recently-deceased detective Callie Saunders makes a deal with the Greek god Hades to find out who is trying to kill his son.

Power Shift - Calinda B
Haunted by ghosts, tortured by a vampire, Chia Petit intends to save the town shifters, even if it means death - or death to her desires for bounty hunter Hung Durand.