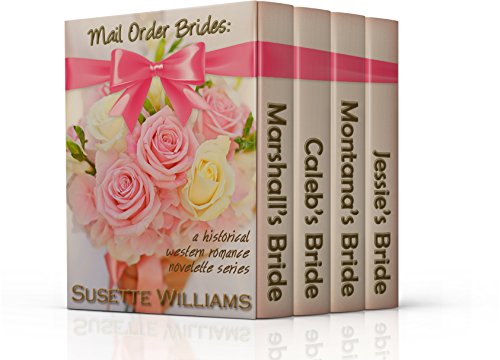 The four Kincaid brothers are about to settle down and get married, whether or not they want to!
Jessie's Bride; Montana's Bride; Caleb's Bride; Marshall's Bride

Jessie Kincaid doesn't plan to follow in his three older brothers' footsteps, which seems to include being bachelors. There might be twice as many men as women in their town, but there are still other ways to go about finding, or competing, for a wife.

Jessie begins writing Sarah Engle in hopes that she will become his mail order bride. Even though there are miles between them, he feels connected to her. He sends her money, along with a stage coach ticket, to come see him so that they can be married.

Not everyone is happy with their decision to wed. When the preacher said, till death do you part, did he mean literally? Or can a mail order bride and her groom truly have a happily ever after ending?

Montana Kincaid figures if writing a mail order bride worked out so well for his youngest brother, why not try it himself? He's made sure to ask all the right questions so he doesn't end up with any of the surprises Jessie had. But life is often full of surprises—unfortunately, they're not all good surprises!

Mary Dobson lost her parents when she was still a child. Her aunt and uncle took her in and to raise. Out of obligation, Mary corresponded with Calvin, a friend of theirs, but stopped writing him once she started receiving letters from Montana. Unsettled by a recent letter from Calvin, Mary decides it best that she join her fiancé, Montana, several months earlier than planned.

Did runaway brides exist as early as the 1800s? Or is there more trouble brewing on the homestead? The Kincaids are not strangers to danger, but this time, will they lose a new addition to their family?

Caleb Kincaid only planned on having a night on the town—playing poker. Ma never liked him gambling, and he was starting to understand why. Especially when he ends up winning a hand that will change his life.

Naomi Hudson had hoped to become a mail order bride in order to get away from having to care for her family—namely her pa and two older brothers. But one night when Pa is drunk, he gambles away her hand in marriage. It seems that even an older fiancé isn't totally interested in her, since he soon loses her to someone else. Doesn't anyone want to marry her for who she is? Can Naomi find it in her heart to care for a man out of love, especially when he needs her most?

Is Marshall Kincaid getting married? Maybe someone should have told him.

Lizzie Neuman came to America filled with hopes and dreams for her and her husband. His unexpected death left her stranded in a new country. Not having anywhere to turn, she reluctantly responds to an ad for a mail order bride.

Marshall never planned to marry. In his line of work, he had to worry about people he arrested in the past coming after him. He accepted the path he'd chosen when he agreed to become the sheriff. He never intended to put a wife or children in harm's way. So when Lizzie shows up in town, claiming to be his fiancée, and holding some letters supposedly from him, it doesn't take a genius to figure out something isn't right.

Who knew enough about Marshall to write such personal letters? Could this be an elaborate scheme to get revenge? Or is Lizzie the realization of a dream he never dared have?