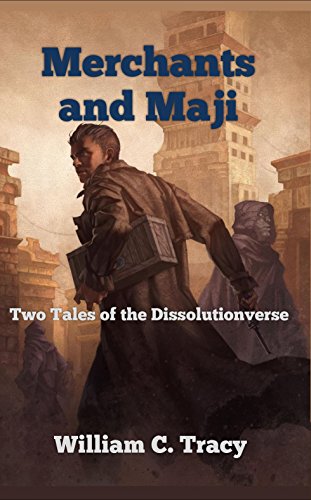 Two stories of the Dissolutionverse, an interstellar society connected not by space flight, but by politics, magic, and intrigue. See through the eyes of the mundane and the elite. An old war machine and a revolutionary space capsule will change relations among the ten species forever.

Last Delivery
Prot, Amra, and crew sell goods across the ten homeworlds in a refitted war transport, saving up to buy a shop. But after fees to travel between worlds, their profits always fall short. Their newest customers are the xenophobic Sureriaj. But when a protest over offworlder trading shuts down all business, the crew's only hope is to leave the planet delivering emergency medical supplies. The contract is for too much money, the seller is using a false name, and the cargo is magically sealed. Nothing could go wrong.

The First Majus in Space
The ten species are in awe of the first space capsule. But when the majus piloting it is assassinated, Origon Cyrysi is the only one able to complete the mission. Too late, he finds the spacecraft may cost him his abilities. And even if Origon returns from space, the escaped assassin might still trigger an interstellar war. Either way, the fuel is burning.