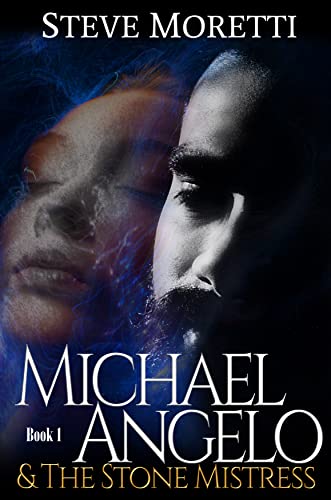 A gifted modern-day fashion photographer discovers a psychic connection to Michelangelo Buonarotti in this thrilling time-slip mystery. “If you love international traveling, art, photography, history, and gastronomic experiences, mixed with a perfect dosage of drama, romance and sexy appeal, this book is for you.”

"Trippy, intriguing... a great time-slip read."
Michael Angelo Thomas has a bad habit of falling in love with every model who poses for him. And though he makes it a rule to never sleep with them, he's not good at following rules. Five hundred years earlier, young Michelangelo Buonarroti is struggling to complete his first major commission, the Pietà.

New York, 1994
Michael is New York's most sought-after fashion photographer. His unorthodox techniques uncover the radiance of each model who steps before his camera.

When a Vogue magazine cover model is found dead from a drug overdose in his NYC apartment after a late-night photography session, he gets sent to Italy on assignment before he can be deported or takes his own life in his overwhelming guilt.

Rome, 1498
Michelangelo works day and night in anguish. He is determined to unlock the statue he can see hidden inside a four-ton block of pure white Carrara marble that dominates his slovenly hovel.

His patron demanded “the most beautiful work of marble in Rome no living artist could better.” While demons of illicit desire torture Michelangelo, he strives to find the ageless face of the mother of God, the Virgin Mary never once stained by lascivious thoughts.

Michael and Michelangelo
These two men driven by their art but separated by time, are brought together by a young Italian woman. Paola is an art historian assigned to assist Michael photograph the world’s top fashion models at the Galleria dell’Accademia in Florence where she has just begun her new job.

In the shadows of Michelangelo’s greatest triumphs, Michael discovers a secret that changes his life, while attracting deadly enemies and the love of a woman worth dying to save.