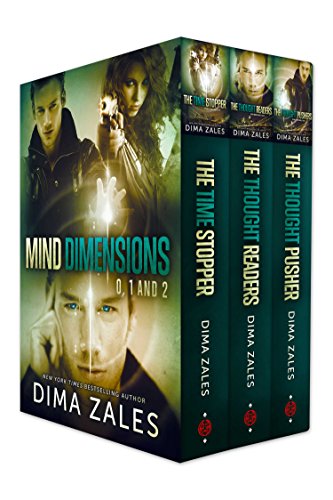 Stopping time was just the beginning... Join Darren as he discovers his hidden ability to read minds, meets Mira, the only person who can help him understand his powers, and flees the Russian mafia determined to punish him.

The first 3 books in the Mind Dimensions series.

Darren's had it easy his whole life. Finishing Harvard at eighteen, a lucrative job on Wall Street at twenty-one—all things are possible when you can cheat by stepping outside time. Thanks to his ability, he's a know-it-all, but what he doesn't know is how he's able to do what he does.

That is, until he meets Mira and discovers her dangerous, hidden world.

Mira can stop time, but she can't change anything. After her parents are murdered, she'll do anything to get revenge—even take on the Russian mob.

Darren's life turned upside down when he met Mira. Now, as he races to uncover his own identity, he confronts new enemies—and realizes his unique powers might extend further than he ever imagined...