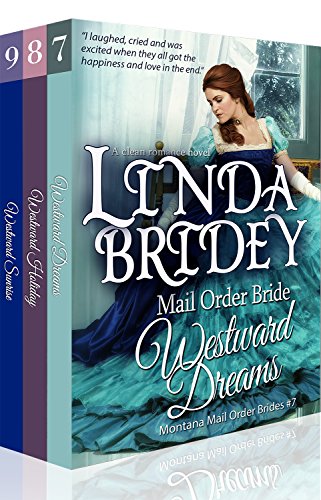 Immerse yourself in books 7 - 9 in the series that critics describe as “a wonderful blend of hope, humor, passion, romance, and forgiveness.

Immerse yourself in books 7 - 9 in the series that critics describe as “a wonderful blend of hope, humor, passion, romance, and forgiveness.

Westward Dreams
When Hannah Fairbanks answers an advertisement for a mail-order-bride, she thinks she's found the man with whom she'll spend the rest of her life. Instead she finds that her prospective husband, Clive Laramie, has lied to her about everything he told her in the letters they exchanged.
Now stranded in Dawson, Hannah decides to make the best of her situation. Unexpectedly she meets Owl a local Lakota brave who instantly captivates Hannah with his dark exotic looks and kindness. Owl ignites a passion in Hannah that she didn't know existed.
Owl has never been attracted to a white woman before, but when he saves Hannah from a disastrous fall in the mud, all of that changes. It only takes one look in her beautiful amber eyes for a connection to be made between them. The proud Lakota brave can't get Hannah out of his mind and begins wooing her.
Amid racial bias and societal conflict, an unlikely romance develops between them. Their relationship is put to the test by a horrible event that creates a terrible divide in the citizens of Dawson. Owl makes a decision that will endanger any future the couple could have together. Can they rise above bigotry and heartache to catch the dream of love they desperately desire?

Westward Holiday
Rebecca Walker has been plunged from the pinnacle of high society into a life of poverty and shame. Her reputation in Savannah, Georgia has been irreversibly tarnished. Forced into menial labor, she dreams of escaping the cruel fate that has befallen her. Rebecca never dreamed she'd answer a mail-order-bride advertisement, but it seems like her best option for creating a better life for herself.

Jake Henderson owns the saloon in Dawson, Montana. Running the Watering Hole has been his life's work, but it doesn't keep him from being lonely. With no serious prospects for marriage available, Jake resorts to putting out an ad for a bride. Surely there has to be someone out there for him.

Dawson isn't what Rebecca had bargained for when she answered Jake's ad. Neither is Jake or the Watering Hole. The handsome bar owner captivates her from the beginning, but Rebecca has a lot to learn about the way of life in Dawson. Jake isn't sure that Rebecca is going to be able to adjust to the rowdy atmosphere of the Watering Hole, but her beauty and her gifted musical ability casts a spell on him. As Christmas nears, they'll have to learn to compromise and listen to each other or be trapped in a loveless marriage. In the season of joy and good will, can they find it their hearts to let go of their pride and reach out to one another again?

Westward Sunrise
Abby Porter is energetic and vivacious. She dreams of finding the perfect man, but knows she won't find him in Wabasha, Minnesota. Upon answering an ad for a mail order bride, she starts corresponding with a man she deems perfect for her.
Elliot Bradbury owns the general store in Dawson, Montana, and it captivated by Abby's unique letters. He finds her charming, amusing, and impulsive. She's just what he's been looking for to help ease his loneliness.
When they meet they instantly form a strong connection full of passion and romance. Things are perfect until another man enters the picture and a major conflict within Dawson threatens to drive them apart. Can their perfect romance endure outside influence or will it be shattered and their love lost?