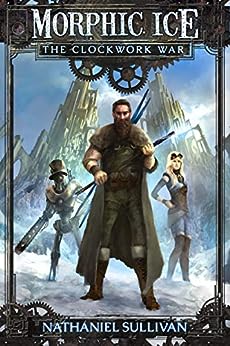 A gruff man from the icy wildlands attempts to stop a war being waged among the clockwork cities. He is joined in his quest by an impulsive student studying the mystic arts, and a deranged Jack-Bot tormented by its human soul.
Together, can they stop a war?

A nomadic warrior.
A mystic student.
A deranged Jack-Bot.
Can they stop the Clockwork War?

For thousands of years the world has been a frozen wasteland where the strong rule. Men depend on the power of steam and metalwork to fight back the constant cold and daunting monsters. Civilization is on the brink of starvation, so when an unexpected patch of fertile land erupts between the clockwork cities, a war over resources is inevitable.

Nandor, a nomadic warrior from the wildlands, believes he has a plan that will ensure peace. Most call him mad, though his imposing figure might stop them from saying so to his face. Through hushed voices, they say he’s a delusional fool. But he might be just the kind of fool they need.

An impulsive mystic girl reluctantly joins him on his quest, as well as a mangy mutt, and a psychopathic Jack-Bot tormented by its human soul.

Duels of fire, clashes of swords, and an uncertain battle await them.

For who can stop a war when the scent of blood is already in the air?