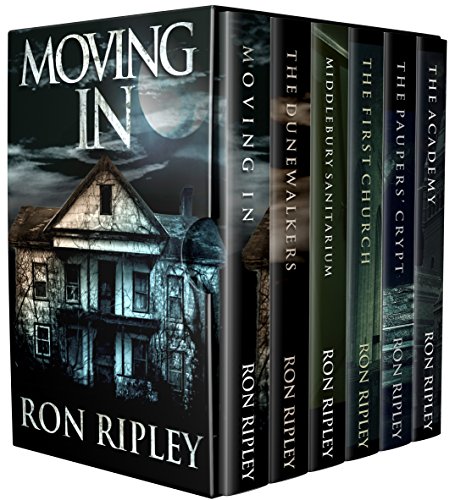 “Iron…and…salt,” whispers the old man. The dead old man. “Hurry or it will be too late…”
When Brian moves, he could have never imagined the shocking history of his new house. As his life starts to unravel, Brian begins to realize: his home has become a haunting den of hell.

"Iron…and…salt," whispers the old man. The dead old man. "Hurry or it will be too late…"
In a bid to escape the stresses of city life, Brian Roy moves his family out into the country, a decision that will forever thrust him into the chilling world of ghosts…

This digital box set contains all of the six thrilling supernatural novels in this best-selling series:

Moving In: The utopia of a peaceful country oasis is brutally shattered when Brian discovers a dead body in the woods, and his home has been infiltrated by murderous ghosts. Perhaps this wasn't the change he was looking for, but Brian prays that he's up to the challenge.

The Dunewalkers: William Engberg moves into a house by the shore to escape his tragic past. Unfortunately, he finds a legion of unwanted guests in his new home: ghosts. Determined to beat them, he enlists the help of ghost hunter Brian Roy, who is armed with a rare journal on how to vanquish the dead.

Middlebury Sanitarium: Brian Roy leads a successful ghost hunting organization called The Leonidas Group, but he may have finally met his match against the evil spirits lurking in Middlebury Sanitarium. Encountering everything from a vengeful King, to lost souls still fighting WWI, Brian and his team have their hands full.

The First Church: In his latest adventure, Brian Roy will fight the ghosts of headless Japanese soldiers wreaking havoc in a New Hampshire church. They have indiscriminately murdered and maimed everyone from children to police officers, and the ghosts' thirst for vengeance is as insatiable as their thirst for saké.

The Paupers' Crypt: Brian Roy succumbs to the stress of his job, and gives himself a break by taking up work as a superintendent at Woods Cemetery. At first, he couldn't be happier … until dead people rear their grisly heads and grasping hands, pulling him back into his old job of ghost hunting.

The Academy: Brian's exhaustion is deeper than ever before. But when he finds out his cousin Mitchell, the principal of the Academy, is running into some ghostly trouble, he races against time to stop them.