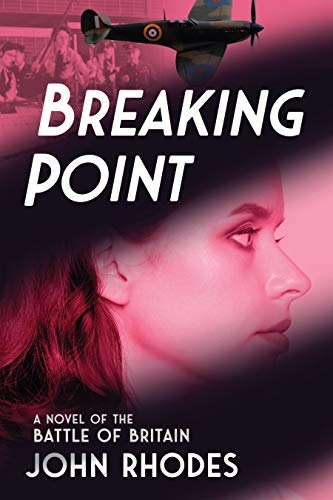 Breaking Point, a novel by John Rhodes, tells the story of the Battle of Britain and the men and women who fought it. Extensively researched, this accurate portrayal of the events surrounding the Battle of Britain. Characters Johnnie Shaux, a Spitfire fighter pilot and Eleanor Rand, a WAAF staff officer in RAF headquarters, represent the men and women who fought to keep Hitler out of Britain.

Breaking Point, a novel by John Rhodes, tells the story of the Battle of Britain and the men and women who fought it...

It's August, 1940. Hitler's triumphant Third Reich has crushed all Europe—except Britain. As Hitler launches a massive aerial assault, only the heavily outnumbered British RAF and the iron will of Winston Churchill can stop him. The fate of Western civilization teeters in the balance.

Johnnie Shaux, a Spitfire fighter pilot, knows that the average life expectancy of a pilot is a mere five hours of operational flying time. Sooner or later his luck will run out. Yet he must constantly summon up the fortitude to fly into conditions in which death is all but inevitable and continue to do so until the inevitable occurs…Meanwhile, Eleanor Rand, a WAAF staff officer in RAF headquarters, is struggling to find her role in a man's world and to make a contribution to the battle. She studies the control room maps that track the ebb and flow of conflict, the aerial thrust and parry, and begins to see the glimmerings of a radical strategic breakthrough…

Breaking Point is based on the actual events of six days in the historic Battle of Britain. The story alternates between Johnnie, face to face with the implacable enemy; and Eleanor, in 11 Group headquarters, using 'zero-sum' game theory to evolve a strategic model of the battle.